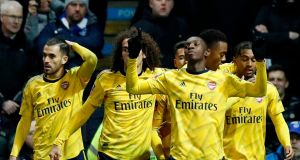 Mikel Arteta is nothing if not brave. With the outcome of his team’s season hinging on progressing in the FA Cup, the Arsenal manager saw his faith in youth rewarded once again with a clinical away victory thanks to goals either side of half-time from Sokratis Papstathopoulos and Eddie Nketiah.

Against motivated opponents backed by a vociferous home crowd, Arsenal rode the early Portsmouth storm but needed two flashes of inspiration from the returning Reiss Nelson to ease their path into the sixth round. The forward – one of six aged 20 or under who started – was a constant menace down the right flank and totally justified his inclusion instead of the £72m record-signing Nicolas Pépé with a brilliant performance that showed Arsenal supporters there may be reasons to be positive about the future after all.

Despite this competition representing Arsenal’s last chance of a trophy after their surprise defeat to Olympiakos in the Europa League, Arteta made nine changes, with the Spaniard Pablo Marí handed his first appearance since joining from Flamengo in January.

In the absence of Pierre-Emerick Aubameyang, David Luiz was made captain, while Nelson made his first start of the year as he returned from injury in a youthful attacking trio alongside Gabriel Martinelli and Nketiah.

Arteta had been impressed with his emerging young players in the ruthless victory at Bournemouth in the previous round but against a Portsmouth side who had won their last 10 home matches in all competitions, the trip to Fratton Park was always likely to be a more testing occasion.

Not since the infamous defeat to Wrexham in 1992 have Arsenal been eliminated from the cup by a team from outside the top two divisions but in Kenny Jackett, their rookie manager was up against someone with pedigree in the FA Cup. The former Wales midfielder played for Watford in the 1984 final and also guided Millwall to the last four in 2013, with his Portsmouth team having already seen off four teams to reach this stage.

Third in League One and chasing a return to the second tier for the first time in nearly eight years, there is a positivity around the club not seen since the 2008 FA Cup triumph that was reflected in the bouncing atmosphere at the kick-off. Despite making six changes from the win over Rochdale on Friday that included leaving both the captain, Tom Naylor, and the top scorer, Ronan Curtis, on the bench, it was not hard to see how Portsmouth have put together such an impressive record at this old ground given the way they started this game.

Arsenal did well to withstand the early barrage, with the striker Ellis Harrison attempting to make the most of a rare start and the winger Marcus Harness also causing the makeshift right-back Papstathopoulos some serious problems.

Lucas Torreira was withdrawn just after the quarter hour following a bad challenge from James Bolton but Portsmouth continued to make the running as they were serenaded with chants of “We’re our way back” from a raucous crowd, even if they failed to really test Emiliano Martínez in the Arsenal goal.

Matteo Guendouzi’s harsh booking for placing the ball on the pitch in an over-deliberate manner as he took a free-kick did nothing to improve Arteta’s mood, but a brilliantly composed finish from Papstathopoulos in first-half injury time from Nelson’s pinpoint cross settled his nerves at just the right time.

Tony Adams, who was the assistant manager to Harry Redknapp at Pompey in 2008 before taking over a few months after their famous triumph at Wembley, was introduced to the crowd at half-time to a rapturous reception from both sets of fans. He also lifted the FA Cup three times with Arsenal and will have been impressed with the way the side he captained with such distinction for 14 years put the tie virtually out of reach at the start of the second half.

Fittingly in a city synonymous with his maritime namesake, once again it was Nelson who provided the ammunition after leaving his marker, Steve Seddon, for dead to allow Nketiah to bundle home at the near post. Replays showed he had been slightly fortunate that the ball deflected into his path as the cross came in, although the 20-year-old’s record of three goals in his last four appearances since being recalled from a loan spell at Leeds are an indication of his growing confidence.

Jackett threw on the boyhood Arsenal fan Curtis and a strike partner John Marquis in a last throw of the dice with 25 minute to play but the hosts struggled to exert the kind of pressure they enjoyed in the first half, with Bukayo Saka’s shot almost extending Arsenal’s lead as the clock ticked down.

But while Portsmouth will know their main priority this season is to achieve promotion, Arteta will take heart from the way his new-look defence saw out this victory with minimal fuss after all the last-minute drama against Olympiakos. - Guardian