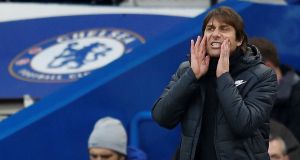 Chelsea manager Antonio Conte said Pedro Rodríguez understood his mistake and wanted to stand up quickly after diving and admit it was a mistake. Photograph: Peter Nicholls/Reuters

Antonio Conte has admitted Pedro Rodríguez was guilty of diving in the chaotic FA Cup replay against Norwich City and has urged the Spain forward to learn from the mistake and avoid a repeat.

Pedro was shown a yellow card for simulation, his second such offence this season. The tumble, just after the hour in Wednesday’s third-round replay at Stamford Bridge, set the tone for everything that followed, with Willian booked for a dive early in extra time, despite Norwich defender Timm Klose admitting he had clipped the Brazilian, and Álvaro Morata cautioned in the final minute after going to ground under Christoph Zimmermann’s challenge.

Chelsea have four bookings for diving this season, after two in each of the last two campaigns. Pedro and Morata, the former Real Madrid striker, were shown second yellow cards against Norwich, ruling them out of Saturday’s trip to Brighton.

“I must be honest, I watched the three situations against Norwich and Willian’s situation was very clear – it was a big mistake,” Conte said. “Then Morata, there is a foul. You can decide whether [it was enough] to concede a penalty or not, but there is contact, so not a dive. We must be honest and accept Pedro dived. I think the player . . . in this situation, the player is clever and intelligent enough to understand when you make a mistake. In this case, Pedro understood this mistake. He didn’t ask for a penalty.

“The player understood the mistake and wanted to stand up quickly and admit it was a mistake. But, sometimes we can make mistakes. The most important thing is to try to recognise the mistake and try to avoid repeating them next time.”

Michy Batshuayi, who will be permitted to leave Chelsea on loan this month if a replacement is recruited, will lead the line at the Amex Stadium in Morata’s absence.

Morata was shown a second yellow card for dissent as he protested against the decision to penalise him for simulation as the game neared the end of extra time.

“He has to overcome this because this is a stupid problem,” Conte said. “He knows very well his mistake. You must learn to control yourself; he has to check himself in future.”