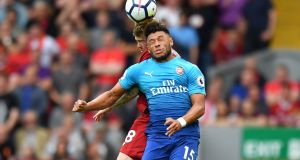 Liverpool are on the verge of signing Alex Oxlade-Chamberlain for £40 million (€43m) from Arsenal and could take their spending inside a week to around £170m (€184.7m) should Monaco sanction the sale of Thomas Lemar on transfer deadline day.

Oxlade-Chamberlain was undergoing a medical with Liverpool staff on Wednesday at St George’s Park, where he is preparing for England’s World Cup qualifiers, having spurned a move to Chelsea in favour of working for Jürgen Klopp at Anfield. The Premier League champions had agreed a £40m deal with Arsenal on Monday but, wary of replicating his right wing-back role for Antonio Conte’s team, the England international declined to discuss the personal terms on offer at Stamford Bridge.

The 24-year-old’s stance enabled Liverpool to develop a long-standing interest in the midfielder and agree similar terms to what Chelsea had agreed – £35m plus £5m in add-ons. Providing there are no unforeseen problems with the medical, Oxlade-Chamberlain will become Liverpool’s second signing of the week following Naby Keïta. The RB Leipzig midfielder will move to Merseyside next summer after Liverpool paid a £7m premium on a £48m (€52m) release clause to secure the Guinea international.

Arsenal initially refused to hold talks with Liverpool over Oxlade-Chamberlain with relations between the club strained by the Luis Suárez dispute of four years ago. However, faced with the prospect of losing the player for nothing when his contract expires at the end of this season, and the midfielder’s reluctance to join Chelsea, they entered and concluded negotiations swiftly on Wednesday.

Oxlade-Chamberlain made 198 appearances for Arsène Wenger’s side after arriving for £12m from Southampton in August 2011. Arsenal’s woeful 4-0 defeat at Liverpool on Sunday is destined to be his last. The midfielder started all four competitive games for Arsenal this season but rejected repeated attempts by the club to extend his contract. Wenger had claimed Arsenal would take a financial hit by keeping Oxlade-Chamberlain until the end of his contract only to relent with Chelsea and then Liverpool meeting the club’s valuation.

The England international faces fierce competition to secure the central midfield role he craves at Anfield. Philippe Coutinho, wanted by Barcelona but not for sale, and Adam Lallana will soon return from injury to compete for places with Jordan Henderson, Emre Can and Georginio Wijnaldum, and Keïta’s arrival will further increase Klopp’s options.

The competition may intensify this season with Liverpool refusing to concede defeat in their pursuit of France international Lemar. Liverpool have had several enquiries for the 21-year-old rejected by Monaco in recent days but will continue to pursue what would be another club record signing – in excess of £70m – until the deadline. The club’s medical staff are on standby to travel to Clairefontaine, where Lemar is preparing for France’s World Cup qualifier against Holland on Thursday, should Monaco relent and agree terms with Liverpool on the final day.

Liverpool also remain interested in Virgil van Dijk but have received no indication that Southampton are prepared to sell their unsettled central defender. Anfield’s business on deadline day will not be confined to incomings. Crystal Palace have not given up hope of signing Mamadou Sakho having had three bids for the French defender rejected this summer. West Bromwich Albion and Leicester City are also interested in the former Paris Saint-Germain captain.

Lazar Markovic could be reunited with his former Hull City manager Marco Silva at Watford and Wolfsburg have emerged as favourites to sign Divock Origi. He was not included in the last two Liverpool match-day squads, for victories over Hoffenheim in the Champions League play-off second leg and Arsenal in the Premier League. The striker has been made available to several European clubs on loan and a move to Wolfsburg is expected. The Bundesliga club are prepared to pay a sizeable loan fee to take the 22-year-old on a season-long deal.

The Belgium international has also been linked with transfers to Tottenham and Newcastle United but Liverpool prefer a loan deal with a European club. They would not consider a loan deal for Origi with a Premier League rival such as Spurs.