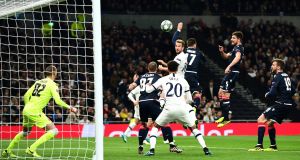 For Mauricio Pochettino and Tottenham, this was more like it. After the trauma of the 7-2 humiliation in their previous Champions League tie here against Bayern Munich and how it had affected them subsequently in the loss at Brighton and the home draw with Watford, they needed a tonic, something to steady the nerves and trample the prospect of an escalating crisis.

They got it on a night when Son Heung-min ran riot, scoring twice but striking fear in the hearts of the Red Star defenders whenever he touched the ball, and Harry Kane weighed in with two more of his own. Érik Lamela got the other one but the truth was that Spurs ought to have reached double figures. Their dominance was total and they certainly had the chances.

Red Star were the most obliging of visitors and their sleepy non-performance was an embarrassment to the manager Vladan Milojevic, who brooded with no little menace in his technical area.

The feel-good factor was fired by Son, who was substituted on 68 minutes in front of the South Stand and took his time walking off around the perimeter of the pitch as the action continued, shaking hands with some of the Spurs fans as he went.

The procession meant that Spurs moved to four points in Champions League Group B and vaulted over Red Star, whom they visit in two weeks’ time. On this evidence, it would be ridiculous to envisage Pochettino’s team losing in Belgrade – even though they have embraced the concept rather too regularly this season – and, consequently, they look set fair for progress to the last 16.

Pochettino’s first target had been not to concede early and, having navigated that pitfall, their hopes truly soared when Kane did likewise to meet a whipped Lamela corner. The striker’s flicked header was perfectly judged and Spurs were up and running.

Pochettino had prioritised pace and energy in his selection. Son stood out. In the final sprinting drill of the warm-up, the forward had left his team-mates for dead, finishing yards in front of them, and then tearing straight off down the tunnel. He was up for this one and, from the first whistle, it was plain that his speed and movement would be problematic for Red Star.

Son might have scored in the fifth minute, after he laid waste to a couple of dark blue shirts, skating away from them as if they were not there, only to shoot weakly at Milan Borjan. It felt as though he was toying with Red Star. When he scored in the 16th minute, it was no surprise and Spurs could savour the feeling of control.

Once again, Lamela was the provider but this time, the assist was from open play and it was a beauty. Taking a pass from Serge Aurier on the right, Lamela checked, spun and hooked across with his left foot, inviting Son to attack it at the far post. Son did precisely that, reaching the ball on the bounce and directing it high into the net.

Red Star were dreadful for the opening quarter. They simply did not turn up and Spurs looked as if they could score with every attack. Kane had slalomed through on 12 minutes only to lack power in his finish and, after Son’s goal for 2-0, Tanguy Ndombélé worked Borjan with a curler and Lamela did likewise with a side-foot from Ben Davies’s cross. Son’s probing had been behind that move.

It was almost too easy and Spurs needed to guard against complacency. Red Star stabilised a little in the second part of the first half and the voices of their supporters could be heard, which was a surprise as they were supposed to have been excluded from the stadium as part of a penalty for racist behaviour at HJK Helsinki. How did they get in?

Spurs did not care and Son’s second goal just before half-time followed a lamentable error from the Red Star captain Marko Marin. The one-time Chelsea player fluffed an attempt to trick past Ndombélé, merely presenting his opponent with the ball and the chance to run and play in Son. The South Korean’s first touch looked a little heavy but it did not matter because Borjan was frozen to the spot. Son rolled his shot home.

The scars from 7-2 hammering against Bayern may never truly fade. Never mind the result being the low point of Pochettino’s tenure, it was one of the worst in the club’s history. Never before had they conceded so many goals at home. Pochettino had preached defiance on Monday and yet there had also been realism about the psychological condition of his players. Their confidence had been, to paraphrase him, on the floor.

This was a step in the right direction, towards rehabilitation, and the only question after the interval concerned how greatly Spurs would embellish the scoreline.

It was no exaggeration to say that Lamela ought to have scored four times in the opening 15 minutes of the second half – which was a damning indictment on Red Star’s efforts or the lack of them.

Lamela scored when he fizzed a shot past Borjan from Aurier’s cross after a trademark spin but there was also a stab over the crossbar, a horrible drag wide and a botched one-on-one.

The chances continued to come, with Son and Kane going close before the latter virtually passed the ball into the far corner to complete the scoring. – Guardian