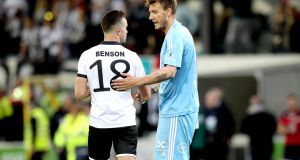 Robbie Benson believes that Dundalk can still beat Rosenborg over the two legs of this Champions League qualifier despite the concession of a “sloppy” goal at Oriel Park that leaves the Irish champions needing to score at least once themselves in Trondheim.

“Over the last two years we have scored in every venue we have played in so that’s positive for us,” says the former UCD midfielder who was one of the home side’s standout performers during the early part of the game when they dominated.

“We are in great form ourselves. The first half there was the best we have played all season, I feel, and hopefully we can bring that into next week.”

Benson accepts that the Rosenborg equaliser a couple of minutes before half-time was a blow with the Irish side obliged to make the running again next week in the event their hosts sit back but the 25 year-old is convinced they will have to show more ambition than that at home.

“Yeah, I think that if they set out like that then they are just waiting for us to have attack after attack,” he says. “And I don’t think they can afford to do that because I think we are going to score if they play like that.

“Patrick (McEleney), for my money, was the best player on the pitch and I don’t think they have a player like that in their ranks. I think we earned their respect tonight; we caused them a lot of problems and gave them a lot of food for thought as they have us.

“We really had them on the back foot,” he continues. “They looked shell-shocked a little bit and you could see how delighted they were to score their goal in the second half. After it, they were happy enough to change their shape in the second half and sit off to stop Patrick getting on the ball so, yeah, I think we earned their respect there tonight.”

Still, the Irish champions were undone to a certain extent by a goal they gifted their opponents and Benson acknowledges that keeping Rosenborg at bay will be important next week although, he insists, it will not be everything for Stephen Kenny’s side.

“All the goals we seem to concede are... I don’t think there’s been one time where we’ve thought ‘wow, what a goal, hats off to them’. I think it’s something that we are going to have to shore up on. We need to keep the door closed next week and have the confidence to go out there and score, but I think we will.

“I don’t think they hurt us in the first half here and we had by far the better chances in the game so we’ll see how the game goes next week....we could be hanging on out there, you never know but we could be on the front foot and if we get one goal out there then they’ll get very nervous.

“No matter what the score, though, you have to remember that out in FH last year, we were one down at half time so, even if they score first, you never know how it’s going to pan out.”