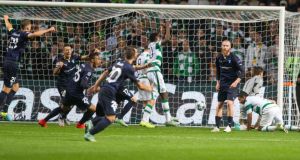 Ronny Deila’s hopes of taking Celtic to the group stage of the Champions League, thereby offering the biggest endorsement yet of his tenure as manager, may have been scuppered by the last act of this first leg. The identity of the man who caused Deila such annoyance will not be lost on anyone in green and white.

Jo Inge Berget, once not so much an ineffectual Celtic player as an anonymous one, hauled Malmo back into this play-off with a goal in the fifth minute of added time from a dreadfully defended corner. At only 3-2 behind heading to their home in Sweden next week, Malmo will clearly fancy their chances of overturning a scenario which earlier looked well beyond their reach.

If the second leg comes even close to the entertainment level of this encounter, there is appeal for neutrals. It produced breathless, gripping football and a game not remotely resembling the taut affair which would be understandable with so much at stake.

Champions League football has a relevance to Celtic way beyond their manager’s reputation. That much was highlighted by the vibrancy of atmosphere around kick-off. Even by this famous old venue’s high standards, the intensity was notable.

For all the Celtic support revel in the domestic dominance of recent times, the humdrum nature of Scotland’s top-flight contrasts markedly with the epic European occasions which have defined this club for so long.

The hosts’ start could not have been more emphatic. Malmo were given no opportunity whatsoever to settle, with the Swedes finding themselves a goal behind before enjoying any meaningful possession in Celtic territory.

Leigh Griffiths claimed that goal, and in doing so supplied justification of Deila’s decision to start him in attack. Nadir Ciftci, a summer signing from Dundee United, has previously been afforded that role without impressing. Griffiths was worthy of the opportunity he instantly grasped.

A slick move, on a drenched Celtic Park pitch, carved open the Malmo defence. Stuart Armstrong produced a surging run before feeding Stefan Johansen. The midfielder played in Griffiths, who had the simplest of tasks in sliding the ball past Johan Wiland. Malmo, inside three minutes, did not so much look rattled as terrified.

The lead was promptly doubled. Johansen was again the provider, this time with a corner which Nir Bitton met inside the six-yard area. Malmo appealed in vain for offside against Griffiths, who was stationed behind the goalkeeper at the time of Bitton’s header.

Even with 10 minutes played, and Malmo’s recent experience of European competition, it looked impossible to make any case for the Swedes hauling themselves back. They had been simply battered aside by Celtic’s energy and tempo. And this, strangely, a Swedish team far more immersed in their season than is the case in Scotland.

It took 22 minutes for Malmo’s first attempt of note. When it arrived, Craig Gordon did well to scramble a Vladimir Rodic effort round the post. Any visiting encouragement on account of that would be readily offset by the glaring element of panic every time Celtic crossed the halfway line. Still, Malmo’s decent spell and the occasional moments of mis-communication in the home defence served as a warning to Deila’s men to box clever.

They did nothing of the sort seven minutes into the second half. Celtic wasted a corner before cheaply conceding possession through their captain, Scott Brown, in midfield.

Malmo’s Magnus Eikrem swung a cross into the penalty area that eluded everyone apart from Berget at the back post. Berget, who endured a miserable time here when on loan from Cardiff City last season, supplied a clever finish on the half-volley, which rendered Gordon helpless.

Celtic’s vulnerability had been clinically exposed with Malmo, now full of confidence, transformed. Berget’s previous Glasgow frustration was settled in one swing of his right boot.

Griffiths was soon on hand to restore the two-goal advantage and settle palpable home nervousness. The former Wolves striker, hardly a player renowned for aerial prowess, did terrifically well to outjump Anton Tinnerholm and loop a header past Wiland. The ball crossed the line via the goalkeeper’s right-hand post. The tenacity alone shown by Griffiths was worthy of a goal.

Now was the time for Celtic to stick. The tireless Griffiths was replaced by Ciftci, with more concern apparent as Mikael Lustig was carted from the pitch on a stretcher after collapsing in a heap without challenge.