Wallabies going on sabbatical a significant blow to Super Rugby

Michael Hooper and other players will be absent next year, just when showcasing the best talent will be critical 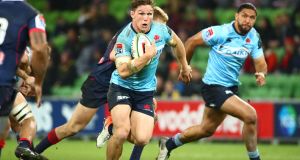 Michael Hooper of the Waratahs runs with the ball during the round 16 Super Rugby match against the Rebels at AAMI Park on May 31st. Photograph: Scott Barbour/Getty Images

Michael Hooper’s sabbatical in Japan next year will be a great outcome for the Wallabies captain and the Australian Test team, but is a body blow to Super Rugby and the NSW Waratahs.

As part of Rugby Australia’s agreement with the Rugby Union Players Association to accept big pay cuts as a result of the financial impact of the coronavirus pandemic, Hooper is one of a select group of players allowed a stint overseas.

By playing for Top League club Toyota Verblitz, Hooper will potentially recoup lost earnings during the Covid-19 crisis while the Wallabies also stand to benefit by having his services next year and beyond. But those making the greatest sacrifice seem to be the Waratahs, who will be without their highest-profile player next season.

Rugby Australia did not have much choice but to agree to the sabbatical. If Rugby Australia and the Waratahs could not honour the full amount of Hooper’s $1.2 million (€1 million) a year salary because of the pandemic, his contract would have become null and void, leaving him free to pursue overseas opportunities.

On 99 Test caps, Hooper was still eligible to play for the Wallabies as an overseas-based player. His sabbatical will ensure he eventually fulfils his contractual obligations in Australia. This is a smart move in some ways, but it does not change the fact Hooper, and other high-profile players, will be absent from Super Rugby next year.

The timing could not be worse. RA is currently re-negotiating its broadcast agreement with Fox Sports, and whoever else, for the next five years. Ideally, in the first year of a new broadcast deal, a sport would want to showcase its best talent. The star system is as important in professional sport as it is in Hollywood.

Australian fans want to see the best of the best and if the best players are overseas, that must inevitably have a detrimental effect on the quality and appeal of the local product. There is the argument that Hooper et al will return from their sabbaticals, but the leave of absence is occurring during a general exodus of players overseas, which has been happening for several years.

Veteran Wallabies secondrower Rob Simmons is joining London Irish at the end of the year, while his locking partner at the Waratahs, Ned Hanigan, is also heading to Japan. Hanigan is not a star player, but he is one of the multitude of middle-range players who are the bedrock of Super Rugby.

There are rumours star Wallabies winger Marika Koroibete will head overseas and if RA cannot honour players’ contracts at the end of this month, many more would be expected to explore that option. If players continue to head overseas, it will become more and more difficult for Australia to populate five Australian Super Rugby teams in either a domestic competition or a trans-Tasman tournament.

There have been a number of suggestions to address the playing depth issue, including importing Argentinian and South African players as well as “leftover” New Zealanders to populate Australia’s sides. And there now seems to be a push by RA to entice overseas-based Australian players back to Australia, including Wallabies such as Rory Arnold, Adam Coleman, Izack Rodda, Will Skelton, Samu Kerevi and Sean McMahon.

Without a lucrative, new broadcast deal, how could Rugby Australia afford to lure players like these back to Australia? Private equity is being touted as the answer. Australia’s Super Rugby teams have been open to private investment for about eight years, but the only franchise with significant private financial backing is, ironically, the Western Force.

When the Force were booted out of Super Rugby in 2017 mining magnate Andrew “Twiggy” Forrest came to the rescue and has kept the franchise afloat, enabling the Perth-based side to play in the Super Rugby AU competition this year. They have been able to hold their own for about 60 minutes a game, but would need to recruit heavily to be genuinely competitive next year.

It would be dangerous to encourage the Force – or any one team for that matter – to go on a spending spree to bring back Australia’s top overseas talent because it would create an anomaly in the salary cap and put the brittle economy of the game in jeopardy. While it would be wonderful to bring Wallabies back from overseas, RA also needs to retain the talent that is here.

In the absence of a blockbuster TV deal and private equity, Australian players could be asked to accept pay cuts again next year, which means RA may have to offer sabbaticals to more players, further diminishing Super Rugby. The sabbatical was designed as a short-term solution to a problem created by an extraordinary circumstance, but if the economy of the game does not markedly improve, it could become a permanent fixture of Australian rugby.