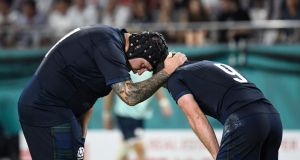 Scotland the proof; any amount of misery can be unburdened at this World Cup.

Yokohama pain forgotten until they return there to face Japan on October 13th. The fourth try bonus finally came in the dying moments but not before two half naked streakers and an almighty blast of Freddie Mercury.

On this sweltering Kobe night, the knife was almost twisted deep by half-time. The promise of three tries denied by an inability to turn set piece and territorial dominance into a 27-0 lead. Ah the Scots would settle for 20-0 but the energy used up in those round the corner spins is costly in this climate.

Slippy, sloppy ball caused by the closed Misaki dome made it so humid and so sticky that you felt like the fried chicken local Kobe kids were flogging outside. Ireland and Russia will be cooked and served Thursday, but on this night the poor Scots and menacing Samoans were baked before 27,586 watering eyes.

You got the feeling Scotland needed to rack up the much needed bonus point before the conditions sapped them of all those fast twitch fibres.

But they kept going.

At least the visitors who journeyed down south got to witness what makes Gregor Townsend’s band of merry men so enticing: Finn Russell and Stuart Hogg on there on the grass having fun, their shape shifting making fools of the opposition.

The only problem is these Polynesians are at their most dangerous when the Siva Tau war dance still surges through their brains. Scotland would have to settle for the boot of Greig Laidlaw to get them motoring on eight minutes.

The scoreboard rested until Sean Maitland oozed class to create and finish his 30th minute try.

All around The Misaki fan-flapping visitors - from all over the globe, really - were desperate to cool down. Nobody had the energy to keep the Mexican Wave going past one lap. Not a bag pipe shrilled nor wailed until the interval.

Imagine how the players felt? They must be forgiven for this calamity of handling errors. Each greasy fumble made Maitland’s catch of Russell’s laser kick all the more impressive. The former Canterbury Crusader still had to shuffle over the line. Laidlaw posted the conversion and Scotland had their 10-0 buffer.

Poor Samoa, figuratively and literally, had a hellish run into this fixture after Afaesetiti Amosa ruptured knee ligaments, while centre Rey Lee-Lo and hooker Motu Matu’u were given three game suspensions for dangerous tackles on Russia captain Vasily Artemyev.

Scotland eventually took full advantage when Russell - back to his delightful best - put Jamie Ritchie into behind the blue line before Laidlaw was pin-balled over the try line by Samoa fullback Tim Nanai-Williams’ accidental tackle-assist.

Scottish hearts were fully lifted - after an equally horrid few days since the thumping by Ireland - when Hogg planted a 43 metre drop goal.

The third try, which took all of 56 minutes, was a double whammy for Samoa as referee Pascal Gauzére ran under the posts and yellow carded Ed Fidow.

There followed a final quarter pursuit of the extra point. A try that may yet save Scotland’s tournament from rack and ruin came on 74 minutes when Maitland’s dive for the corner was disrupted by Fidow’s sliding knees.

Penalty try and the Samoan walked with a second yellow card turning into red.