Lancaster: Decision on Ringrose fitness will be down to Schmidt 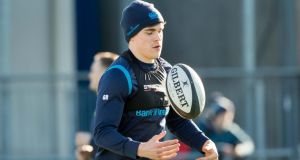 A projected return date from injury for Garry Ringrose is Leinster’s Pro14 match against the Southern Kings on Friday, February 23rd, the day before Ireland take on Wales in the Six Nations Championship match at the Aviva stadium. Seán O’Brien is still troubled by a hip issue and not under consideration for Saturday’s Pro14 game against the Scarlets at the RDS (3.15).

The clamour for Ringrose’s return has assumed a greater urgency following Robbie Henshaw’s shoulder injury against Italy last Saturday that has sidelined him for the tournament and potentially beyond.

Leinster senior coach Stuart Lancaster explained: “He’s [Ringrose] close. I don’t think he’ll feature this weekend but he is close and obviously with Robbie’s injury I think everyone wants to see him [Ringrose] back anyway but we want to make sure he’s 100 per cent right.

“He hasn’t actually trained with the team yet. He’s done work on the side of the pitch – he certainly seems to be running well but he hasn’t actually changed direction, made decisions in the moment etc. So once he takes that step, we’ll all be in a better idea of where he’s going to be.

“If he’s come through today [Monday] there’s been no reaction, he could train with our team on Thursday. It would be too close for him to play Saturday. Then the following week, we’ll see how he goes. I think the sensible thing is for everyone to get game time, so we’ve got Kings coming round the corner.”

When asked whether he thought Ringrose could go straight back into the Irish squad for the Wales match without any game time for Leinster, Lancaster explained that it was a possibility and would be down to Ireland coach Joe Schmidt but it was a remote one in his opinion.

“He’s certainly got the quality, but that will be Joe’s call. He knows how quickly he can get up to speed in the Ireland camp. From our point of view, he’ll be back in the mix sooner rather than later. Obviously Ireland will pick him when he’s ready. It’s not impossible, but it’s a step. It’s a big step.”

On the Henshaw injury, Lancaster explained that he hadn’t spoke to the player since he underwent a surgical procedure on Monday but that Leinster’s Champions Cup quarter-final against Saracens at the Aviva stadium on Sunday, April 1st, might come around a little too quickly for the 24-year-old centre.

“I don’t know is the honest answer. Obviously he’s out of the Six Nations and with the Saracens game being two weeks after the Six Nations; Ireland play England, we play Ospreys and then it’s Saracens. So the reality is it’s going to be tight.”

Lancaster spoke with Ireland debutant Jordan Larmour about his debut and the coach offered an interesting insight into his time in charge with England and how he dealt with introducing young players into the national team to make their debuts.

“I had a good chat with Jordan Larmour about his experience and asked him about how he found it. For him it is another game of rugby but he appreciated the noise around the team is a lot bigger. That’s the bit for young players that they find the most difficult.

“I gave 25 or 30 players their first cap with England and a lot of them were Jordan’s age; Anthony Watson, Jonathan Joseph, George [Ford], Owen [Farrell], the list goes on. One of the markers for me was whether they would have the ability or not to deal with the game, the occasion, the week leading into the game. [Did they have] the temperament and a personality? There was one or two that I was more cautious [with] and maybe I didn’t pick them for whatever reason.

“The ones who I felt had the temperament you’d pick and they would never let you down. Jordan is in that category. He has a great temperament, he’s hungry to learn, wants to get better. If he makes a mistake he won’t dwell on it too long. A player who has made a mistake can sometimes be thinking in a game ‘oh my god I have just made a mistake’ or the consequence of the mistake is this.

“They go out of the moment and the best place is to stay in the moment all the time. Jordan can do that. You saw that, it didn’t faze him [when he missed that tackle] because the next thing he wanted to do was get his hands on the ball. He got the ball, stepped and the guy fell over. He didn’t even touch him.

“We have seen him do that so many times in training. Jordan’s biggest strength as well as his undoubted skill-set is his temperament. I am 100 per cent certain that he will learn from it but not be fazed by it.”