Connacht run in six tries to rout Ospreys at Sportsground 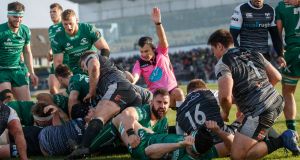 Connacht put the ill-disciplined Ospreys to the sword in a six-try 46-5 win at the Sportsground which keeps them in the hunt for the Guinness Pro 14 playoffs and Champions Cup qualification.

The double whammy of a Keelan Giles yellow card and a penalty try completed a dire first half for the Ospreys, as wind-backed Connacht clinically scored tries through Tom Farrell, Matt Healy and Kieran Marmion to claim a 34-5 half-time lead.

Marmion, who surely will come back into the Ireland frame against France, completed a brace of tries before replacement Tom McCartney piled over from a 69th-minute maul.

Jordan Lay and Bradley Davies were both sin-binned in the second half for the Ospreys, who could not add to Matthew Aubrey’s earlier score as a difficult Six Nations block, which saw doubts emerge about the region’s long-term future, ended in a crushing defeat.

Connacht head coach Andy Friend demanded a big reaction from his side after last week’s poor showing in Glasgow, and they were on the board within two minutes.

Influential centre Peter Robb broke through midfield and linked with the supporting Marmion who deftly fed Farrell to run in his sixth Pro 14 try of the season from 25 metres out.

Once-capped Australian international Godwin converted in the blustery conditions and tagged on two penalties to open up a 13-0 lead by the 15th minute.

However, his clearance kick from the restart was charged down by Ospreys captain Olly Cracknell and scrumhalf Aubrey gathered the loose ball to go over in the right corner.

Godwin had a smashing solo try ruled out for obstruction by Colby Fainga’a back on halfway, but the scores kept coming for the westerners.

Godwin and Farrell combined on a 24th-minute switch move which invited Healy to hurtle through, evade a tackle and go in under the posts. Godwin converted and try number three arrived soon after.

Godwin’s huge touchfinder led to a crooked Ospreys lineout and Marmion determinedly wrestled his way over via the five-metre scrum.

Although a Cory Allen break and some scrum pressure had the visitors pressing for a late try, Tiernan O’Halloran’s intercept launched Connacht downfield and Giles’s deliberate knock-on – with three Connacht men waiting to convert an overlap – resulted in referee Marius Mitrea binning him and awarding a penalty try.

With prop Lay guilty of playing the ball on the ground near his own try-line, the Ospreys were briefly down to 13 men on the resumption.

They held their Conference A rivals out until soft hands from Quinn Roux and Shane Delahunt released skipper Jarrad Butler through a gap and he passed for Marmion to finish off.

Wales lock Davies’s trip on Stephen Fitzgerald earned him 10 minutes in the bin, allowing Connacht to quickly set up the final try of the afternoon for McCartney.