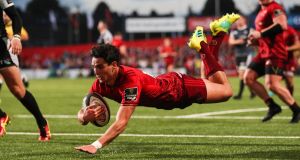 It took just 21 minutes for Joey Carbery to endear himself to Munster fans in his first Guinness Pro14 start at Musgrave Park on Friday night.

The increasingly dominant Munster pack had produced the early grunt and grind to secure a 16th-minute penalty try but when Ospreys responded with a 20th-minute penalty from Sam Davies to reduce the lead to 7-3, Carbery produced a score of immense quality.

The roar of approval could be heard well beyond the suburb of Ballyphehane after the Leinster-turned-Munster outhalf seized on a loose clearance to scythe his way through from 35 metres for a brilliant individual try that he converted himself.

The expectant crowd was immediately won over and they afforded the newcomer a standing ovation even as he popped over the resultant conversion.

Despite a second penalty from Davies, Carbery had shown the way for Munster, who immediately hit back with a third score from James Cronin and Carbery effortlessly added the points to secure a 21-6 lead which was no more than a side brilliantly led by returning captain Peter O’Mahony deserved.

Last weekend in Scotstoun Munster were dismayed with the intensity of their first-half play and the effectiveness of their set-piece, but from the off at Musgrave Park it was vastly different Munster pack. Straight from the off the 11 changes made by Johann van Graan made their impact, with Sammy Arnold, Tadhg Beirne and Chris Cloete looking particularly lively in the opening exchanges, while the Munster maul laid down a real marker.

Five minutes in a Mike Haley chip over the top found its way to Beirne but he was unable to link with Rhys Marshall with the Ospreys defence vulnerable.

And, unlike last week’s disastrous first-half display in Glasgow, everything went right for Munster in this first 40 minutes. They secured the winning bonus point in the 40th minute when Marshall dived over and Carbery, predictably, converted for a 28-6 half-time lead.

Munster forwards coach Jerry Flannery would have been thrilled with the maul and lineout domination of his side – Beirne claimed two excellent lineout steals in the first-half – and right before the interval Adam Beard was sinbinned for taking out a lifter close to his try-line in the lead up to Marshall’s try. Indeed he was the second Ospreys player to see yellow, following Georgi Nemsadze’s earlier maul infringement.

The win was wrapped up already, but it got better after the break. Even though Ospreys struck for a 60th-minute try from Luke Morgan, converted by Davies, much of the second half was was played out in the visitors’ half.

Marshall had already grabbed a second try, Arno Botha had another and Darren Sweetnam scored a beauty, two of them converted by Carbery before his was replaced and the other came from Ian Keatley.

As the game wore on, Munster merely hoped to play out the game without any drama, although there was a slight injury worry when Stephen Archer had to return to replace the injured John Ryan, only then to be forced off himself a few minutes later.

Van Graan will have to deal with that, but at least he can be happy with a much improved Munster performance as the heavyweights continue to return to the fold, and to make their presence felt in the process.

It was a victory very much based on a dominant Munster pack’s performance, but Carbery and to a lesser extent, fine performances by Duncan Williams and Sweetnam, also helped the province cruise to an easy win.

Replacements: I Phillips for Baldwin, G Volpi for Morris (both 50 mins), A Jeffries for Botha (57), N smith for Jones (58). T Thomas-Wheeler for Callan, H Dirkson for Williams (both 63), J Ratti for Cross, M Aubrey for Habberfield (both 70).