Tom English: Scotland have a newfound hope and pride in their team

Under Townsend, side have rediscovered joy after close to 20 years of grinding failure 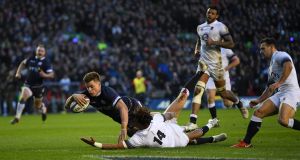 Huw Jones dives over for one of his two tries for Scotland in the defeat of England at Murrayfield two weeks ago. Photograph: Shaun Botterill/Getty Images

Truly, the Scottish midfield haven’t known anything like this guy since Gregor Townsend ran amok the last time the Scots won the championship. That was 19 years ago, when the Six Nations was still just five.

Born in Edinburgh, reared in Kent and living and playing for years in Cape Town, there’s a curious story as how Jones was identified. Legend has it that while suffering a bout of insomnia, the Glasgow Warriors analyst, Gavin Vaughan, switched on his television in the middle of the night and started watching some provincial rugby from South Africa.

The stand-out player was a young lad called Jones. Welsh ancestry, no doubt, thought Vaughan. He hit Google and screamed Eureka! In a rugby age when getting a team prepared for a Test match has become as mind-alteringly complex as launching a rocket into space, there is something utterly glorious about a player of Jones’s class being discovered by accident by a man in his pyjamas.

To understand where Scotland are now – exciting and improving but still with a huge amount to prove in real badlands of Six Nations rugby – then you have to take a quick look at where they have come from. If you remember how grim things were for Ireland in the 1990s, then it was a bit like that. A tartan cringe.

Under Andy Robinson, Townsend was Scotland’s attack coach from 2009. In his four seasons Scotland finished 5th, 5th, 5th and last in the Six Nations table. They were wooden-spooned in his final season. Five games, five defeats, four tries scored, which was an improvement on 2010 when they managed three tries in the entire campaign.

Townsend was young and bright and full of ideas, but his arrival was akin to a man busting in on a funeral with a defibrillator. It wasn’t appreciated at the time, but Townsend being moved into the role of head coach of Glasgow in 2012 was where it started.

With Glasgow, Townsend nurtured, inspired and upped the standard. Finn Russell was – and probably still is – an unbroken thoroughbred capable of great unpredictability, in good ways and bad. Townsend’s work in coaching him, understanding him and backing him has been excellent over the years.

Russell wasn’t the only one. Townsend developed Alex Dunbar and Peter Horne, he took in Tommy Seymour from his Ulster wilderness and made a player of him, he mentored Ali Price and delivered him to the Test arena, too. Townsend didn’t have to discover Stuart Hogg. A blind man could have seen him coming, but he did have to manage him. By his own admission, after his breakthrough on the 2011 Lions tour in Australia, Hogg lost the plot.

“Selfishly, it became all about me, I thought I was better than I was, I put myself ahead of the team,” said Hogg about his ostrich years. “I didn’t behave properly and that’s not something I look back on with any pride. Gregor turned me around. He helped put me back on track.”

Townsend moulded a club side that would win a Pro12 title with style against Munster in Belfast, but he also delivered player upon player to the national team, soon in the charge of the redoubtable Kiwi, Vern Cotter. Regularly, Cotter’s starting XV would have 10 of Townsend’s Glasgow players.

Cotter was a terrific appointment. Stern Vern, as he came to be known, was majestically deadpan. In his first Six Nations he lost five out of five, but he didn’t bat an eyelid amid the flak. “Skillset and mindset,” he said, over and over. “Once we up the skillset and mindset, then this team will be fine. It will happen.”

His work started to pay off. From the inner-sanctum came stories of his attention to detail and his unrelenting focus on developing leaders. Part of Scotland’s myriad problems over the years has been a chronic lack of leadership. From a country that produced Finlay Calder, John Jeffrey, David Sole, Gavin Hastings and more, the lack of mentally strong men was both bizarre and damaging. A key feature of Cotter’s mission was to get his players to speak up, toughen up and take responsibility.

In the 2016 Six Nations, Scotland won two games and scored 11 tries, the most they had ever scored in the championship since Italy joined. Last season, they won three games and scored 14 tries. Between them, Cotter and Townsend were starting to move Scotland out of the doldrums.

The SRU made a change last summer. For fear of losing Townsend to a club job in England or France they offered him the Scotland role. Cotter didn’t want to leave, but the aesthetic of seeing their one coach of genuine class disappear out the door was too much for the SRU to bear, so Townsend was anointed.

They made another bold strategical move. Richard Cockerill, the former Leicester hooker and coach, became Edinburgh’s coach. Given how dreadful Edinburgh had been for so long, few people thought they’d get him, but they did.

Where Glasgow flew, Edinburgh fell on their face. They had a track record for recruiting poorly and losing frequently. Their desperate mental fragility made them also-rans. The SRU, with two just professional teams to pick from, couldn’t afford one of them to be a competitive non-entity.

Cockerill is now doing the kind of things that Townsend did at Glasgow years before. His experience and his brutal honesty is serving Scotland well. Before the autumn, there was a media bandwagon forming behind Blair Kinghorn, the young Edinburgh fullback. There was talk that he was ready for a Test debut in November. Cockerill didn’t so much douse the talk as take a blowtorch to it.

Kinghorn, he said, was well off it. He had talent, for sure. Loads of it. But he had too many mistakes in his game, too much vulnerability. His gist? A club player might get away with some of the unacceptable errors that Kinghorn was making, but all of that would be magnified on the international stage. Now was not his time.

In fairness to Kinghorn, he’s worked hard, has tidied up his game and looks a more mature player. Townsend gave him his first cap off the bench against England a fortnight ago and he gets a second against Ireland on the wing.

There is a realism in all of this. Nobody is climbing atop the Murrayfield stand and declaring a new dawn. Everybody remembers Twickenham last season. Nobody will ever forget Cardiff this season.

You’ll have to travel a long way to find anybody in Scotland who thinks Scotland will – as opposed to “can” – beat Ireland. What they have, though, is a newfound hope and pride in their team. They have rediscovered joy after close to 20 years of grinding failure. Nobody knows what ups and downs lie ahead of them, but there’s a near-certainty that whatever happens to Townsend’s boys, it’s not going to be dull.