New Zealand have much to gain with victory in Johannesburg 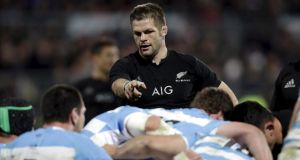 New Zealand captain Richie McCaw will play for potentially the last time in what he considers the “ultimate” challenge of a Rugby Championship Test against South Africa at Ellis Park.

McCaw has hinted he will retire after this year’s World Cup, making this probably his last appearance in South Africa – though not necessarily his final cap against the Springboks with the teams on a collision course for the semi-finals in England.

“I haven’t thought too much about it, I’m focused on the coming game and want to win. If this is to be my last game [in South Africa], I want the lasting memory to be one of a win,” McCaw said.

“We’ve been coming here (to Johannesburg) for the past four years and whether it’s been at Soccer City or Ellis Park we have considered these games against the Springboks to be the toughest,” McCaw said.

“It’s always the most physical, the most intense match. It’s the game you want to be a part of and Ellis Park in particular is the ultimate place to play at.

“We know we have to take it up a level when we come here.”

McCaw says the game will provide an excellent test of character for his side, including debutants Lima Sopoaga and James Broadhurst, who start at outhalf and lock.

“When it’s toughest, that’s when the best players stand up. It may come down to one moment, and so you keep going, you stay in the game for that moment,” McCaw said.

“It can mean the difference between winning and losing. That’s also the way you as a captain can inspire those around you.”

Meanwhile, Argentina’s last meeting with Australia, in which they notched their first Rugby Championship win nine months ago, will be foremost in both teams’ minds when they clash again at the same Mendoza venue on Saturday.

For the Wallabies, boosted by their 24-20 win over South Africa in Brisbane last weekend, it will be a matter of setting the record straight against the Pumas.