Pool B: RWC regulars Namibia on the hunt for a maiden victory 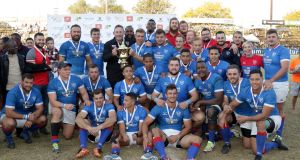 Namibia booked their place at the World Cup with a 53-28 victory over Kenya. Fullback Chrysander Botha (2) and Louis Van der Westhuizen (2) were among the try scorers for the winners, while Cliven Loubser scored 22 points. They were the 19th team to qualify for the tournament in Japan. Despite being the lowest ranked side in this year’s competition - they’re currently down in 22nd, one place behind Portugal - they actually have impressive RWC heritage. This will be their sixth-consecutive appearance at the tournament, which is a very good record. They are still searching for their first win, however.

Phil Davies won 46 caps for Wales between 1985 and 1995, playing his entire club rugby career with the Scarlets. His coaching career has taken him to Leeds, the Scarlets, Cardiff, Wales Under-20s, Worcester Warriors, Blues and Namibia; in the latter capacity initially as a technical advisor and then in 2015 head coach.

Johan Deysel scored a try in Namibia’s 58-14 loss to New Zealand in the opening match of the 2015 RWC in England, one of nine for his country in 22 appearances. The 27-year-old centre has previously played for the Sharks in Super Rugby and the Currie Cup but has agreed a contract with play with French ProD2 club Colomiers.

Outhalf Cliven Loubser has made quite an impression since making his debut for the Welwitschias, as the Namibian national side are known, in the 2017 African Gold Cup when he scored a try and three conversions in the final win over Kenya. He has been first choice ever since and during the summer it was his late conversion that handed Namibia a historic maiden test 30-28 win over tournament hosts Uruguay in the World Rugby Nations Cup.

It has to be the 2007 RWC pool match against Ireland in Bordeaux, a game in which they were very competitive, scoring two tries before going down 32-17. Ireland even got the benefit of a try from Jerry Flannery that should not have been awarded as the hooker lost control of the ball over the line.

Former Namibian coach Johan Diergaardt said: “With the current crop of players that are in the team right now, I can safely say that we are heading in the right direction and our chances of winning our first ever match at the World Cup could be this year.” They’ll probably look at the game against Canada as the most viable option if they are to achieve that objective.