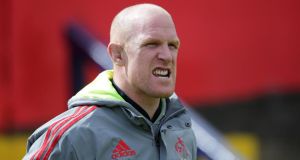 Australia great Michael Lynagh views Ireland’s Paul O’Connell as the best man to lead the British and Irish Lions this summer, but predicts that Warren Gatland will opt for Sam Warburton.

Bookmakers suspended betting on the captaincy after Warburton was backed heavily late last week and the Wales flanker is expected to be unveiled when the squad is announced in London on Tuesday.

O’Connell, who has missed most of the season with a back injury, became a genuine contender following an epic display for Munster against Harlequins in the Heineken Cup quarter-finals.

Lynagh, who played for the Wallabies in their 2-1 series defeat to Finlay Calder’s 1989 Lions, believes the 2009 skipper is the outstanding candidate.

“I guess the favourite is Warburton, but for me it has to be Paul O’Connell,” said Lynagh, speaking at today’s launch of Specsavers’ sponsorship of match officials for the British and Irish Lions tour to Australia.

“He’s done it before, he’s a big guy, an inspirational bloke, fresh because he hasn’t played much this season and is as fit as he’s ever been.

“From a political point of view you have Scottish, Welsh and English represented in the management and no Irish. Appointing O’Connell would balance things up.”

Lynagh subscribes to the view that for the first time a ‘tour captain’, who would not be guaranteed his place in the Test XV, should be chosen.

“If he’s not playing well, do you drop the captain? If you pick a tour captain then he has to perform during the opening three weeks of the tour to get in the Test team. That would be interesting.”

Lynagh, who believes veteran George Smith will be recalled at openside, insists that the Lions’ best chance of winning their first Test series since 1997 is to overpower the smaller Wallabies.

However, he expects Quade Cooper, Kurtley Beale and James O’Connor to prove less physical but every bit as dangerous.

While there is a belief that the troubled but mercurial trio, who have repeatedly been involved in off-field controversies, should not start in the same XV, Lynagh insists they must play together.

“But if he can prove he’s overcome that, a bit like a Kevin Pietersen, there’s room for him in the team at 10 and he can win games.

“He’s more mature now and doesn’t take as many risks, but they’re the risks that change games and series.

“While guys like him, Beale and O’Connor have issues, they’re very hard to defend against.

“All that’s important is that they’re in the team somewhere because they’re the type of players who can turn a game or a series.”