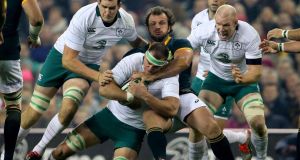 I had nothing to do with his journey in becoming an international rugby player. I have never coached him. I simply witnessed his long term, athletic development.

From Blackrock College, to the Ospreys Academy, through the Ireland age teams, into the Irish academies, then onto Leinster and representing Ireland in a famous win. He is the typical overnight success, that takes years of work.

His father, my old Swansea clubmate, Mike Ruddock, would never say a word, but I know he is bursting with pride.

I first meet Rhys when I was the backs coach for Leinster in the 1999 Heineken Cup. Mike Ruddock was the head coach of Leinster and he asked me to coach the Leinster backs for six weeks. I stayed in Europe 13 years. Thanks Mikey!

I remember sitting at the Ruddock’s dinner table, in their Greystones home and talking with Mike, regarding the strategic changes Leinster required if they were to develop into a European power. In 1999, that produced a long list.

Little did I know that the little boy sitting across the table, would become a major part in the astonishing success of both Leinster and Irish rugby. The long-term athletic development,that Rhys and all players undertake, has competitive games at its heart.

The fixture against Georgia is another opportunity for both the Georgians and the Irish players to learn.

In the amateur days, on national team tours, they played midweek fixtures. These games were a great environment where young players were “blooded” into the international game.

A midweek game against Northern Transvaal, on the South African high veldt, or in Timaru, in New Zealand’s South Island, were days where players learned about the mental and physical hardness required to be a successful international. Playing alongside more experienced leaders, it was a great leaning environment. Young players were allowed to “fail” in this environment. If they played poorly they were coached and counselled, mostly by their more experienced peers. They were seldom dropped. They were given “tough love”, then run out against a mob of hardened Kiwi farmers, whose only joy in life was to belt the visitors into submission, so the All Blacks’ task on Saturday was much easier.

In the international rugby calendar, with clubs clambering for financial survival and demanding that players be available for their domestic competitions, National team tours, with midweek games are dead.

It was a time when rugby was dangerous and sex was safe. Like beers in the changing room with your opposite number, it is now ancient history. And the game is poorer for it. So how do young players gain international competition for long-term athletic development? Basically they don’t. Players are selected for international games and if they fail they are dropped. Sometimes to never be reselected. Robbie Henshaw and Jared Payne’s selection last week is a classic case. Robbie was asked to play inside centre and Jared to play outside centre. Both for the first time in a major international. They is no questioning that they were both inspired selections by Joe Schmidt.

However, where is the system that provides these two fine young athletes with the opportunity to gain experience at international level in their new positions prior to walking out against the might of the Springboks?

It was essential for Ireland that Payne and Henshaw succeed, but to select that centre combination against such a formidable foe was a calculated, yet massive, gamble.

Win over the Boks

The reaction from the hugely supportive Irish rugby community to the win over the Boks was joyous. And, please pardon me, but as always a little over top.

The win against South Africa was inspirational. The tactics performed, especially against the Boks maul were technically perfect, yet there are still grave areas of concern.

The hard truth is that the Irish defence was magnificent as was the tactical kicking and the chasing defensive line. But the scrum was very poor, as was the Irish ball in hand game. Ireland mauled and kicked well but their running game was non-existent. Much has been made of the fact that there were no Irish offloads, as if it were a preordained tactic. There were no offloads because there were no Irish players getting beyond the first line of attack. Ireland kicked over the defensive line superbly, but the Irish ball carry was nullified completely.

If the same occurs against Australia, Ireland will lose.

The Georgia match provides Ireland with an opportunity to ignite their attacking systems. It also provides a much needed day for the “young guns” to gain more valuable international game time.

Ireland will defeat Georgia easily, but it is the preparation for the Wallaby match that is the real test.

The Australia game is the most important November international of the last decade in Irish rugby. Defeat next week and Ireland will remain a team capable of one-off wins, with a kicking game, in the wet.

That is the harsh reality.

1 ‘Manchester United are lucky to have you’: Klopp responds to Donegal schoolboy’s letter
2 Liam Toland: Larmour can distract England while others flourish
3 England coach Eddie Jones apologises after making ‘half-Asian’ comment
4 Cian Healy’s hunger for battle undiminished by the years
5 This month a decade ago, football and Dublin changed course
Real news has value SUBSCRIBE