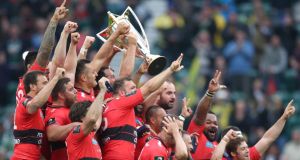 Toulon players celebrate after the European Champions Cup final win against Clermont Auvergne at Twickenham in May. Photograph: Billy Stickland/Inpho.

Toulon were unable to reveal where they will host Leinster, without the say so of their owner, leaving a gap in the fixtures released yesterday by European Professional Club Rugby (EPCR).

There are three options. Toulon’s fortress, Stade Mayol, where the three-time champions are all but unbeatable, only holds 15,400 so a move to Nice or Marseilles seems certain. The EPCR have accommodated this fixture with a Sunday date, and 4.15pm kick-off, to avoid a clash with the French soccer clubs who usually reside at these stadiums.

Regardless, Toulon and O’Connell will be welcomed to the Aviva stadium by Leo Cullen’s men for the round four match on Saturday, December 19th.

Leinster’s opening Pool 5 game is against Wasps at the RDS on Sunday, November 15th – just two weeks after the World Cup final – while Bath travel to Toulon.

Munster have a softer landing with their Pool 4 opener in Limerick against Treviso on November 14th while Ulster travel to Oyonnax the same day.

Munster’s back-to-back fixtures in December are home then away to the Leicester Tigers while Ulster welcome Toulouse to Belfast before visiting Stade Ernest Wallon on Sunday, December 20th.

Despite the condensed run off for rounds one to four, the pool matches will conclude as usual in January with Leinster against Wasps at the Rioch Arena, Ulster hosting Oyonnox and Munster away to Treviso.

This year’s final is in Lyon on May 14th.

Connacht’s Challenge Cup fixtures cannot be confirmed until next week as they await a venue for the new Russia team. They may have to travel to Siberia.