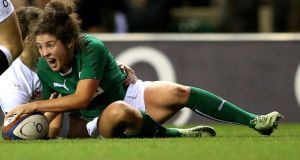 Ireland scrumhalf Larissa Muldoon, seen here scoring a try against England at Twickenham, returns to the starting side to play France in Pau on Friday. Photograph: James Crombie/Inpho

Ireland women’s coach Philip Doyle has made three changes and one positional change to the side that ran out convincing winners against Italy at the Aviva Stadium last Saturday for Friday’s final Six Nations game away to France in Pau (5.45pm Irish time).

Centre Jenny Murphy, scrumhalf Larissa Muldoon and prop Ailis Egan all return to the starting line-up after starting the Italian game on the bench, with Grace Davitt, Amy Davis and Stacey-Lea Kennedy joining the replacements.

There is also a positional change, with Gillian Bourke switching back to hooker from tighthead to make way for Egan’s return.

France are aiming to win the Grand Slam on Friday, with Ireland two points behind and with an inferior points difference of plus 99 to France’s plus 137

Doyle expects a physical battle at the Stade du Hameau against a side that Ireland beat on their way to a historic Grand Slam tile last season.

“The team put in a fine performance against Italy in their first ever game at the Aviva Stadium but we are under no illusions as to the challenge ahead of us,” said Doyle . “France are the form team of the Championship and beat England reasonably comfortably in round one. We will need to match their physicality and take our chances when they come.”