Errors add up to disappointing night in Colwyn Bay 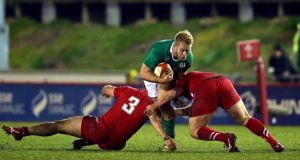 Ireland’s Jeremy Loughman is tackled by the Wales duo of Dillon Lewis and Luke Garrett during the Under-20 Six Nations match at Parc Eirias in Colwyn Bay. Photograph: Morgan Treacy/Inpho

Ireland will reflect on a scrappy, mistake-laden display with huge disappointment as they failed to represent the ability in the group in Colwyn Bay. Wales were deserving winners, physically dominant in the collisions, set piece and breakdown in particular and they also managed to score the only try of the match through centre Owen Watkin.

Irish hooker Zack McCall enjoyed an excellent game, Ross Byrne was unerring with the placed ball, Stephen Fitzgerald and Garry Ringrose defended well while the bench gave the visitors some momentum but it was scant consolation on a frustrating night.

Ireland’s performance in the first half was very poor, disjointed and laboured in possession and brittle in defence. The set piece was a liability, sloppy in the manner in which they turned over ball at the lineout, while completely dominated in the scrum, where at one point the Welsh eight took their opponents for a 20-metre walk that led to a penalty.

Wales led 9-6, outhalf Jared Evans kicking three penalties to a brace from his Irish counterpart Byrne with the interval looming when the home side struck a decisive blow.

Ireland scrumhalf Nick McCarthy was isolated in possession and turned over by Rory Thornton, the Welsh counter-attacked down the blindside and by virtue of some gorgeous offloading centre Watkin scampered over in the corner. Evans’s conversion grazed the right side of the crossbar, Wales’ 10-point advantage was no more than they deserved.

Ireland’s line speed in defence was pedestrian but it was the jittery nature of their performance that was the most disconcerting. The error-rate after the interval for the visitors was still a huge issue as was the scrum. Byrne’s superb place-kicking saw him tag on a couple of penalties to one from Evans in a contest that for the most part was pockmarked by low grade fare.

Jeremy Loughman paid the price for Ireland’s scrum woes when receiving a yellow card as Ireland were penalised for the umpteenth time. The visitors changed their two props after defending with character on their own line and amazingly forced a scrum penalty. Basic mistakes continued to undermine Irish ambition as they struggled to go retain possession through more than three or four phases.

The Irish bench gave team some impetus and they almost conjured a great escape after superb work by Stephen McVeigh initially but Stephen Fitzgerald was hauled down a couple of metres short of the line. Another mistake, another turnover and then a scrum penalty allowed Wales to clear their lines.

Replacements: L Belcher (Blues) for Elias, J Viggers (Blues) for Fox (both 66 mins); A Beard (Ospreys) for Keddie, B Nightingale (Dragons) for Watkin (both 72 mins).