Rugby World Cup - Thompson: ‘Everyone had written us off . . . It’s a very special moment’

Jamie Joseph: ‘We’ve been preparing for this game for a hell of a lot longer than what the Irish have’ 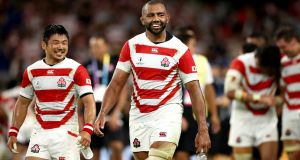 The fireworks that shook the concrete. Japan have their Genoa moment to follow Stuttgart. They have their David O’Leary to put beside Ray Houghton as Kenki Fukuoka joins Karne Hesketh in Takamagahara – that place reserved for mythical and real heroes.

They have a victory that could flood rugby into the winding alleyways of Hamamatsu and Shinjuku. They have a glorious night in Shizuoka, Ireland felled fair and square, to shine beside the Brighton miracle of 2015.

Find a Japanese person and ask them how they feel.

It means so much more than happy. It’s a word to make you dance and sing and scream. This was bliss, a journey down the Ame-no-ukihashi (the floating bridge to heaven).

Ireland refused to play the victim card. Perhaps they should. Joe Schmidt hinted at a damning and imminent report on the refereeing of Angus Gardner that may as well be deleted as soon as the email drops.

They attempted to play it straight. Next game. Front up like rugby men, knowing full well that this result could ruin to their World Cup.

“We’ve been preparing for this game for a hell of a lot longer than what the Irish have,” said Joseph of the pre-programmed Irish line about planning for one game at a time. “I said to the players: ‘We’ve been focusing on today for the last year at least – subconsciously for the last three years – and Ireland have been thinking about it since Monday.”

Eventually the cliche will devour you. Ireland fed this line to the media. One game at a time is not how any modern professional outfit prepares. Everyone knows this but Japan still used it.

“We thought we had a bit of an advantage with that,” added Joseph.

The Brave Blossoms were a superior outfit from the moment their injured captain Michael Leitch arrived – GAA style – after 30 minutes for the injured Amanaki Mafi, who had came into the game injured.

When Leitch cleaned Rob Kearney from a ruck the Ecopa went so ballistic that the fillings in your teeth stung.

Japan’s smiling lock Luke Thompson gathered the clippings from Dublin. He saw the big read about Rassie Erasmus. Heard all the talk of Ireland’s imminent showdown with the Springboks.

“Everyone had written us off,” said Thompson. “All the Irish media were talking about South Africa and how they are going to play them in the quarter-finals and what they have to do. So we know what we have to do. It’s a very special moment.”

Ireland’s management also know, better than anyone else, the real damage to their squad after concussive blows to Kearney (HIA fail), Tadhg Furlong (pass) and Chris Farrell (severity unknown). They know the state of Johnny Sexton. We don’t. Joey Carbery gave us a clue: he doesn’t feel match fit after ankle surgery in August, yet the 23-year-old Munster outhalf was preferred on the bench ahead of the 34-year-old leader.

In World Cups, players play hurt. There are strong indications that Sexton could not suit up. The alternative is Ireland badly underestimated the hosts. Believed they could find a way over this game and onto Russia next Thursday without the world player of the year.

Either way, history has been written. Everyone now knows what happened when Ireland failed to drive a stake into Japanese hearts after taking a 12-3 lead on 21 minutes.

Joseph knows the score. So does Thompson.

“Tonight we’ll sit down and might have a quiet beer,” said the 38-year-old, with 19 tackles in 63 minutes of this thunderous Test match.

“That’s why you play the game, to enjoy moments like this, and this is a special moment for, not only us players, but for Japan rugby in general. We’ll enjoy tonight and maybe train tomorrow or at least travel. We have some really tough games coming up and we are still nowhere near where we want to be in terms of our goals.”

Samoa are still in this fight, Scotland have suddenly been revived with the pair of them are on a collision course in Kobe this Monday.

Pool A is alive. The World Cup cities are aflame.