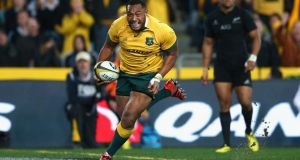 Suddenly, Australia have emerged as a genuine force to be reckoned with at the World Cup. And, for the first time in a very long time, there are now serious doubts about New Zealand being able to win back-to-back World Cups.

Pay no heed to post-match comments by Australian coach Michael Cheika that beating the All Blacks on Saturday night counts for “just a little bit” in his team’s overall development, and no more than that. He’s talking down the Wallabies to keep his men flying as low under the radar as possible for World Cup pool opponents England and Wales. He’s wasting his time.

A Bledisloe Cup Test victory against the All Blacks happens only once in a blue moon – 2011, in fact, was when Australia last pulled it off. Saturday night’s 27-19 victory against a full-strength All Blacks side is a very big deal indeed. And this, mind you, was no great escape a la Totai Kefu’s Inspector Gadget heroics in 2001, or John Eales’s kick at the death in 2000. In Aussie parlance, it was a fair dinkum pasting from start to finish.

Incredibly, it started with the Australian forward pack. It’s hard to recall a better scrummaging performance. Even former All Black prop Richard Loe, who rarely has a kind word for the Wallabies, grudgingly conceded the Australian scrum “had parity or better throughout”.

Cheika’s decision to hire former Argentine hooker Mario Ledesma as scrum coach has paid off handsomely. Fixing the scrum has proved an impossible task for nigh on a decade. Ledesma, capped 84 times for the Pumas, has finally broken through. He deserves all the praise coming his way.

People have been laughing at the Australian forward pack for years. Only fools would still be giggling after Saturday night. The Wallabies flying under the radar for England and Wales? No chance now. Somewhat ironically, it’s the backs who could turn out to the team’s Achilles heel.

Post-match media commentary has contrasted the five-star pack performance with what some say was a fairly ordinary night for Wallabies scrumhalf Nick Phipps and outhalf Bernard Foley. The Foley criticism is fair – he went missing in action early and remained unsighted, even to Phipps, it seemed, who threw a couple of wild passes to nobody when looking for a first receiver.

To be fair, Phipps fared no worse than his vaunted All Black opposite Aaron Smith. It was a tough night for both. But that had to with the ferocious nature of the contest at the breakdown, with hands and feet clawing all over the place from both sides. Cheika recognised that and defended Phipps after the match, saying a few technical improvements in approaching unsettled ruck bases would be an easy fix.

Fixing Foley, however, could be a more difficult nut to crack. He looks badly out of sorts. The team has looked far more cohesive when Matt Toomua has come off the bench. And with Quade Cooper a joker of last resort only, Chieka will have to make a firm decision very soon on his preferred halves combination for the World Cup.

Foley and Cooper have been given a fair crack and come up short. Chieka may now have no choice but go with Matt Giteau at 10, and Toomua at 12. We will know soon enough when the Wallabies announce their team for this weekend’s Bledisloe Cup decider in Auckland.

Of course, everyone expects the All Blacks to bounce back in Auckland, just like they did last year when the Wallabies drew 12-12 in Sydney, only to get pulverised 51-20 a week later at Eden Park. How will the All Blacks respond? The world will be watching. They didn’t play at their best against the Wallabies, but having said that we expect the All Blacks to win even when off their game.

They’ve done it so many times against all comers – why would anyone doubt them? Well, one chap did – NZ Herald columnist Chris Rattue, who All Blacks coach Steve Hansen once famously called called “NZ’s village idiot”.

Rattue’s rants are comical (unless you’re Quade Cooper who took offence at Rattue recently saying “for every rabbit Cooper can pull out of a hat . . . there’s a truck load of missing bunnies”).

Sometimes, though, the best comedy is grounded in truth. “The All Blacks are miles ahead in the rankings, but it doesn’t reflect how close South Africa, Australia and a few others are. Amazing escape acts – I still can’t get over the truly miraculous one against Ireland – are obscuring the true picture,” he said.

The Wallabies shattered the All Blacks illusion on Saturday night. Game on Bledisloe Cup. And the World Cup too.