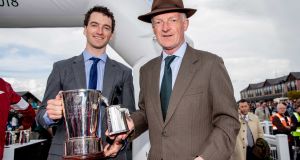 Patrick Mullins has become the most successful amateur jockey ever after riding his 546th career winner at Sligo on Sunday.

Victory aboard the 4-7 favourite Queen Boulevard, trained by his father, Willie, meant he overtook the old record of 545 set by Ted Walsh.

Mullins, 28, said afterwards: “That’s fantastic and it’s something quite cool. Obviously I couldn’t have done without standing on what my parents have built in Closutton and on what my grandparents built in Doninga before that.

“I’m in a very privileged position and get a lot of opportunities. It’s good to be able to make the most of them.”

Mullins rode his first race in December 2005 and his first winner came the following June. He has been champion amateur in Ireland 10 times and has won four times at the Cheltenham festival.

“I see Derek [O’Connor] with a thousand point-to-point winners so that’s probably the next aim. But that’s a long way off,” he said.