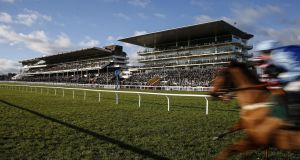 On an unseasonably hot afternoon in the Cotswolds, the decision was taken to not run the three-mile-two-furlong contest, which was scheduled to be the fourth race on the card.

The British Horseracing Authority tweeted: “Three mile two furlong race abandoned on horse welfare grounds due to the heat and extreme distance of the race.”

Cheltenham added: “Following a discussion between stewards, vets, trainers and jockeys, the fourth race will be abandoned due to race distance and the heat. The remainder of the card will go ahead.”

The remaining three races, one of which was a bumper, were all due to be staged at around two miles.

Stipendiary steward Simon Cowley told Racing UK: “We’ve been monitoring the situation throughout the day because of the heat and we put measures in place after each race with water at the pull-up section.

“The jockeys have been telling us that a lot of the horses have been getting unexpectedly tired and we suspect this is because the horses are not acclimatised off the back of a cold and wet winter.

“So taking that in mind, we enquired into the effect of the heat on horses and with a three-mile-two race coming up, we listened to trainers and jockeys and decided a race over that far in these conditions was a little bit too risky.

“We had to take a measured view and felt it was too risky. There’s a mixture of science and instinct involved be we had to look at the bigger perspective. That race in these conditions is probably asking too much.

“We looked at putting the race on the end of the card, but the temperature is not due to drop significantly.”

Grand National-winning trainer Donald McCain was due to run Same Circus in the race and was not happy with the decision to abandon.

“I just think it’s an appalling decision as I don’t know how you can differentiate between distances,” said McCain.

“If it’s too hot to race, which I don’t think it is by the way, then it’s too hot and the whole meeting should be abandoned.

“Hopefully nothing happens in the remaining races because if it does they’ve given people every opportunity to give them stick.

“Is it any more testing for a staying chaser to run in a staying chase than for a juvenile filly to run over two miles at Cheltenham? I don’t think it is.

“If they had abandoned altogether I might not have agreed, but I probably wouldn’t have said anything. I think we should have raced.”