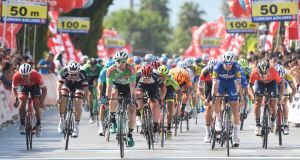 Sam Bennett bounced back from his second place on Tuesday’s opening stage of the Presidential Tour of Turkey to grab victory plus the race lead on Wednesday.

He tracked Alvaro Hodeg in the finale of stage two to Antalya, marking the Colombian when his QuickStep Floors teammate, stage one winner Maximiliano Richeze, led him out. Bennett whipped past inside the final 150 metres and reached the line first. In doing so he overtook Richeze in the overall standings.

“I’m happy. It’s a bit of a relief,” he said after what is his fifth UCI-ranked victory of the year. “I came here after a quiet mid-season. I won’t say I can relax now but some of the pressure has gone. There are still some opportunities to come and the guys did a fantastic job today, as well. I really want to thank them.

“In the finale, I didn’t really know if we’d caught the breakaway or not because with around ten kilometres to go it was so dangerous that I just had to concentrate on what I was doing. It’s always good to get a victory going into the off-season. It keeps the morale high when you don’t have much racing.”

With time bonuses up for grabs, Bennett is now six seconds clear of Richeze in the overall standings. He is 12 seconds ahead of the third-placed rider, Jean-Pierre Drucker (BMC Racing Team). Bennett also leads the points classification.

Bennett won four out of the race’s six stages last year and will be targetting more success in the days ahead.