Octopus wrestling, ski ballet and sports that are now extinct

Many sports claim to be endangered but what about those that don’t exist anymore? 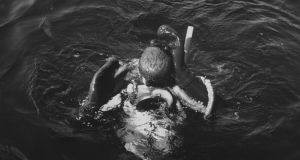 Gary Keffler, three times the world champion, may be the last of the great competitive octopus wrestlers. Keffler is 84 now and it has been more than 50 years since he fought, but octopus wrestling is not something you forget how to do. The biggest he ever grappled was 21ft long. But that was a stunt for Lloyd Bridges’ old TV show Sea Hunt; most of his opponents were just under half that, maybe eight, nine or 10ft long, and around 50lb, “no bones, all gristle”. The secret, Keffler said, is to make sure you “grab them right where the tentacles meet the head” and “don’t let it get a hold of your arm or leg because they’ll try and bite you with their beak”.

The old octopus wrestling grounds in Puget Sound have been shut down now. The Washington Fish and Wildlife Commission tightened the law in the 1970s, when they limited the catch to one a day, and then again in 2013, when they outlawed it altogether along large stretches of the coast. Keffler changed his mind, and a lot of others too, about the cruelty of it when he worked on a TV show with Jacques Cousteau, Octopus, Octopus, released in 1971. But back in the 50s and 60s, before anyone really understood how intelligent and complex octopuses are, the World Octopus Wrestling Championships at Titlow Beach at used to draw quite a crowd.

In the mid-1960s it used to be a regular on network TV. They covered it on ABC’s Wide World of Sports, and NBC’s Sports in Action. In those years the championships used to attract around a hundred divers from across the USA, who split up into three-man teams to compete across two heats, one in scuba gear, one without. Each team had two hours to catch as many octopuses as they could. They would swim down around 50ft, find an octopus, wrestle it up to the surface and weigh it. Points were given per pound, and whoever caught the greatest weight won. More often as not that was Keffler. At the end of the day they then set the octopuses free. Mostly.

“It was something to do I guess,” Keffler has said, “go out and rassle an octopus.” But really, he admitted years later, it was pretty poor sport. An octopus isn’t much of an opponent. “They’re not very aggressive,” Keffler said. “They have good suction, but if you get their arms and pull the suction cups go ‘pop, pop, pop’ – they don’t have a lot of holding strength.” So long as you were “just a little bit careful about them grabbing your mask or getting a hold of your hose – those days we had two-hose regulators and they could crimple it, and tighten it up so the air would be cut off.” After a decade or so of competition, everyone got bored and “moved on to other things”.

Last time anyone tried octopus wrangling in Puget Sound, in 2013, he was shamed on social media and stoned with insults and death threats. The scandal made the Daily Mail. Which is why the local authorities decided to change the law, again.

Octopus wrestling, then, is one of those rare sports that’s now entirely extinct. A lot of us talk about the sports we love as if they are endangered; the anxiety sometimes seems to be a congenital part of following anything that isn’t football. It’s why the ECB are hellbent on reinventing cricket, why the European Tour have launched their six-hole team golf tournament, why the IAAF got behind Nitro Athletics.

It’s sobering, then, to realise there really are a lot of sports that no one plays any more. Or it would be, until you really consider the list, which is laid out in Edward Brooke-Hitching’s book Fox Tossing, Octopus Wrestling, and Other Forgotten Sports. Because most of them (aerial golf, dwile flonking, auto polo) are just as preposterous as octopus wrestling. Like ski ballet, which, incredible to think, was actually contested at the Winter Olympics as a demonstration sport in both 1988 and 1992. Ballet was one of the three original disciplines of freestyle skiing, along with the moguls and the aerials. Those two both ended up making the full programme. Ski ballet didn’t.

The unwary can easily lose an afternoon spiralling down a YouTube rabbit hole of highlights from the heyday of ski ballet in the 1980s, when men and women with elaborate perms, in sequinned ski suits with puffy-sleeves and shoulder pads would twist and turn through pirouettes, cartwheels and somersaults to classical, pop and opera music.

Once there was a thriving professional ski ballet circuit. But then most of the competitors turned amateur so they could compete in the 1988 Olympics at Calgary. Turned out their sport couldn’t really stand the scrutiny. The IOC cut it in 1996, and in 2000 the International Ski Federation scrapped formal competition altogether.

Maybe it was always going to end that way. The first great pioneer of male ski ballet was Alan “The Puppet” Schoenberger, who used to ski in top-hat, tails and mime make-up. Schoenberger won the world championships in 1976 and would have done again in 1977 if he hadn’t decided to abandon the competition midway through his final routine, when he stopped the music, stepped out of his skis, and walked off the piste. It was a protest against all the new regulations in his sport. “I wanted to make the statement,” Schoenberger said later, “that I was only really there because I wanted to dance.” See, some pastimes just aren’t meant to be sports. – Guardian service