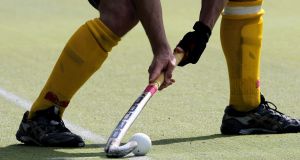 Shane O’Donoghue’s hat-trick propelled Glenanne to the EY Hockey League for their first national title since 2010, as they stormed back from 2-0 down to beat Lisnagarvey 4-2. It was a performance typical of their campaign, one marked by late goals and numerous comebacks from losing positions to snatch points.

And so they kept their nerve at the home of the second-placed Garvey, the only side who could possibly depose them, who had started in superb fashion.

The Nelson brother combined to put them in front with Matthew feeding Daniel, who fired home an excellent reverse-stick effort. Andy Williamson then struck from a penalty corner to threaten to put the brakes on possible Glens celebrations.

But O’Donoghue gave them a lifeline from the penalty spot before half-time, and he rebounded in the third quarter off James Milliken’s pads for 2-2. The game-breaking moment came when Glenanne defended a corner and broke quickly, eventually working the ball to Shannon Boucher to put them in front for the first time.

Soon after O’Donoghue flicked into the top corner and the winning of the title with a suitable flourish from the league’s outstanding player.

The league victory came with two games to spare for the Tallaght club, and brings with it a European spot and top seeding for the EY Champions Trophy playoffs at Havelock Park, which take place in early May.

Irish Senior Cup winners Three Rock Rovers are also confirmed in the playoffs. They came from 2-0 behind at three-quarter time in their league tie against Pembroke. Luke Madeley scored twice from corners, making it five in two games against the Dublin 4 side this week, while Harry Morris provided the game winner for 3-2.

The big scrap will be for fourth place with Monkstown just ahead of Pembroke at the moment.

Elsewhere, in the EYHL promotion playoff series Instonians won the wild card round, crucially beating UCD 2-1 on Sunday afternoon to win the five-team competition. They go on to the Cork next weekend to join Bandon, YMCA and Bangor, with the winner taking direct promotion to the national division.