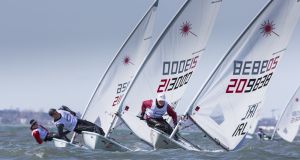 Competition at the championships, staged jointly by the National and Royal St George yacht clubs, has attracted nearly 200 under-18 sailors across five classes: Laser Radial, Laser 4.7, 420, Topper and Optimist.

Single-hander McMahon took two wins from two races sailed to be top of his 34-boat fleet in blustery, southerly winds and big seas that are set to reach gale force on Friday.

The regatta, according to Irish sailing organisers, is a “primary talent-spotting” event of the year for its Academy and Junior classes and, with performance scouts such as Olympic team manager James O’Callaghan on duty, there’s certainly no better time to shine for the 200 or so competitors taking part.

In spite of his perfect scoreline, the Howth Yacht Club sailor is being chased hard by Peter Fagan of Skerries Sailing Club who counts two seconds with nine races left to sail until Sunday.

In the double-handers, Malahide Yacht Club’s all-girl pairing of Gemma McDowell and Emma Gallagher lead the 16-boat 420 class after establishing a commanding lead in the second race to be three points clear of Morgan Lyttle and Patrick Whyte of the host port. Kinsale favourites Mícheál Ó Súilleabháin and Michael Carroll won the first race but did not finish the second, dropping them to eighth overall.

Tralee Bay’s Justin Lucas continues his winning form in the Optimist class after last weekend’s international success in the Netherlands, where the Kerry helmsman was a runner-up at the Magic Marine Easter regatta, a long weekend of sailing on the Brassemeer, northeast of Leiden. Lucas finished just two points behind the winner, Kerem Erkmen of Turkey, in the final tally. In the biggest class of the Dublin Bay event, Lucas took three wins on the Seapoint course to lead the 69-boat Optimist Trials Series.

The Laser 4.7s and Topper classes at the Youth Regatta start racing on Friday.

With racing continuing at the Trofeo Princesa Sofia Regatta at Palma, Finn Lynch made the gold fleet cut in the men’s Laser class.

Irish Olympic campaigners in the 49er, Radial and Finn are out to make the most of this weekend’s strong competition in Mallorca given there is now just four months until the World Sailing Championships, where 40 per cent of all Tokyo 2020 Olympic berths are up for grabs.

James O’Callaghan, who has just returned from the massive regatta, is confident two Olympic berths can be secured for Ireland at the Danish Worlds, but he also warns that “at the midway point in Palma, it’s clear the Irish teams still have a lot of work to do before August”.

Co Mayo’s Joan Mulloy currently lies 18 from 24 in the solo division, and Co Meath’s Tom Dolan is eighth from 11 in the double-handed division sailing with Tanguy Bouroullec. Both Irish boats have approximately 235 miles left to sail.