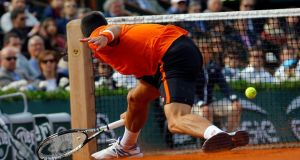 Novak Djokovic of Serbia in action against Richard Gasquet of France during their fourth round match for the French Open tennis tournament at Roland Garros in Paris. Photo: EPA

Novak Djokovic demolished Frenchman Richard Gasquet 6-1 6-2 6-3 in an awe-inspiring performance at the French Open on Monday to set up a much-anticipated quarter-final clash with Rafa Nadal.

The Serbian needed seven break points to break the 20th seed’s serve in the third game but once he had that advantage in the bag, there was no looking back. The top seed won nine games in a row to put Gasquet on the ropes.

“I managed to stay mentally tough, kept things together, and played a really good match. I could not ask for a better lead-up to that match,” Djokovic told a news conference when asked about the showdown with Nadal.

He now heads into what has already been dubbed the match of the season still unbeaten this year on clay, a surface mastered by Nadal like no other before.

“Playing him here and playing him in any other tournament in the world is completely different,” added Djokovic.

Drop shots, gravity-defying crosscourt backhand winners and steely defence -- Djokovic had way too much in his reserves to sink a hapless Gasquet.

The French favourite managed to please the Court Philippe Chatrier crowd with some sublime one-handed backhands but they failed to stall Djokovic’s charge towards the quarter-finals.

Djokovic, who dropped serve only once, ended Gasquet’s ordeal with an exquisite dropshot as he continued his quest to win the only grand slam title missing from his collection.

Nadal warmed up for the quarter-final blockbuster against the world number one with a 6-3 6-1 5-7 6-2 triumph over American tyro Jack Sock earlier in the day.

The omens had looked rather foreboding for Sock even before he stepped on court for the fourth round encounter -- with his rival holding an 11-0 win-loss record against Americans on clay.

Sock’s hopes of stalling that run looked all but over within the opening exchanges of the contest when he fell 3-0 behind to the nine-times champion.

The 22-year-old unexpectedly snatched the third set from Nadal but that only delayed the inevitable as the Spaniard became the first man to win a record 70 matches at Roland Garros when he fired down an unreturnable serve.

The Spanish sixth seed is bidding to become the first man to win 10 titles at the same grand slam.