Azerbaijan Grand Prix the latest to be called off 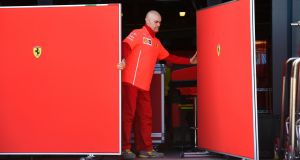 The F1 Grand Prix in Baku in June has been postponed. Photograph: Getty Images

The Azerbaijan Grand Prix on June 7th has become the eighth meeting of the Formula One season to be called off. The race in Baku was due to run back to back with the Canadian Grand Prix which is also likely not to take place.

The Azerbaijan GP had hoped to be the first race of the F1 season, with meetings in Australia, Bahrain, Vietnam, China, the Netherlands, Spain and Monaco already off.

“This comes as a direct result of the global Covid-19 pandemic and has been based entirely on the expert guidance provided to us by the relevant authorities,” a statement from the organisers read. “The primary concern has been the health and wellbeing of the Azerbaijani people as well as all visiting fans, staff and championship participants.”

The organisers said they are hopeful of rescheduling the race but, with the increasing number of postponements, finding slots in the calendar is becoming increasingly difficult.

The Canadian GP is set to take place on 14 June in Montreal but on Monday Canada warned it would not send athletes to the Tokyo Olympics unless the Games were postponed for a year. Canada has also recently tightened its restrictions on travel into the country. Last weekthe prime minister, Justin Trudeau, announced the country had closed its borders to non-Canadian citizens.

The next race after Canada is the French Grand Prix on 28 June and that too must be considered to be in doubt. Last week the Le Mans 24 Hours, also in June, was postponed until 19-20 September. The following meeting is the Austrian GP on 5 July, followed by the British Grand Prix on 19 July. Either may yet become the opening meeting. This year is the 70th anniversary of the first F1 world championship. The first race of the first season in 1950 was held at Silverstone. A total of 22 races were scheduled to be held this season and at least eight are required to constitute a world championship.

Ross Brawn, the F1 sporting director, has said the sport is already looking at altering the schedule of race weekends in an attempt to fit in postponed races. The suggestion of two-day meetings was already being considered as a way of allowing three consecutive races – a triple-header – to take place. In those circumstances, the meetings would consist of one practice session before qualifying on Saturday and then the race on Sunday.

“I think we can squeeze them in but it depends when when the season can start,” Brawn said. “One thing we have been talking about was two-day weekends and therefore if we have a triple-header with two-day weekends, that could be an option.”

Last time the sport held a triple-header was in 2018, when the French, Austrian and British grands prix were held back to back. Afterwards the teams objected to the strain it put on their personnel. Brawn emphasised he would need them to cooperate if similar plans were instituted this year.

“I think what we need from the teams this year is flexibility,” he said. “They’ve got to give some scope to do these things because we are in very unusual circumstances and we’ve got to make sure we have a season that gives a good economic opportunity for the teams, [MAKE SURE]we don’t put teams in too much hardship, because we can’t have the races if somebody doesn’t want to do it three weekends on the trot.”

The announcement that Azerbaijan had been called off came on a day when Lewis Hamilton was strongly critical of people in the UK ignoring instructions on social distancing, saying it was “irresponsible and selfish”.

“There are people out there still going to large gatherings, which I feel is totally irresponsible and selfish,” the world champion posted on Instagram. “There is nothing we can do about it either way except try to isolate ourselves, stop ourselves from catching it and spreading it.

“I’m praying for those working at the local store, deliverers, doctors and nurses who put their own health at risk to help others and keep the countries running. Those are the heroes.”

Hamilton has been self-isolating after meeting the actor Idris Elba and Sophie Grégoire Trudeau, the wife of the Canadian prime minister, both of whom have since been diagnosed with coronavirus but the British driver has not shown symptoms. – Guardian