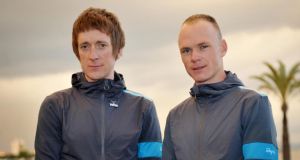 Bradley Wiggins (left) has confirmed he is likely to miss this year’s Tour de France as Team Sky focus their efforts around defending champion Chris Froome.

Bradley Wiggins confirmed this morning that he will not be riding the Tour de France if the defending champion Chris Froome holds his form up to the start of the race in Leeds on July 5th. “As it stands I won’t be there,”

The 2012 winner told BBC Breakfast. “The team is focused around Chris Froome who has got a chance of winning his second Tour and it’s been decided to base the team around him.”

Indeed the writing appeared to be on the wall recently when both the Sky head Dave Brailsford and Froome dismissed the idea of Wiggins riding as No2 to last year’s winner, while Wiggins’s non-selection for the key Tour build-up race, the Dauphiné Libéré, where Froome will ride with his right-hand man Richie Porte confirmed he was not in Sky’s core Tour de France squad.

“You have a leader and eight guys supporting that leader and a lot of times the guys supporting the leader are almost good enough to win in their own right as we saw a couple of years ago with myself and Chris,” he explained, before conceding that Froome may well have had a role in deciding the team.

“As the defending champion Chris has a say in who he has around him, he has guys who go to all his build-up races and training camps throughout the year. I’ve been on a totally different path and as the Tour approaches Dave Brailsford decides who is best placed.”

Wiggins recently won the Tour of California and is set to start the Tour of Switzerland next week for Team Sky; Froome will build up to the Tour with the Dauphiné Libéré race which starts on Sunday. “As it stands, all being well and Chris staying fit and healthy, that’s the team,” concluded Wiggins, conceding that there is still a chance he may be called in if Froome has a mishap between now and the Tour de France start.

He told L’Equipe overnight: “I could be in the team and help Richie, for example. But if something happens to one of the other squad members, it won’t be me who replaces him.”

He added: “There will be plenty to cheer about. We’ve got Mark Cavendish there whose got a great chance of picking up the yellow jersey on day one and it’s going to be a huge celebration.”