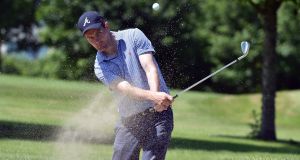 Amateur golf might be the preserve of the young guns these days, but Portmarnock’s James Fox might just turn out to be the daddy in the West of Ireland Championship at Rosses Point.

While he’s only 35, the father of two is almost in the grizzled veteran category compared to the other three semi-finalists after the field was whittled down to the last four in a freezing east wind.

“With two kids under four, I haven’t played a lot from the past two years,” said wily competitor Fox, who faces 23-year-old international Alex Gleeson from Castle after a brace of hard-fought 2 and 1 wins over Co Cavan’s Shane McDermott and Athlone’s Thomas O’Connor.

“I’ve enjoyed playing some competitive golf again, and I’m hoping to play a lot more this year and looking forward to playing again in the morning.”

Big-hitting 21-year-old Rob Brazill from Naas takes on 18-year-old Jack Madden from Royal Portrush in the other semi-final which makes former Irish Close champion Gleeson – a full-time amateur and a former junior member of Co Sligo – the red-hot favourite to beat Fox, whose brother Noel won the “West” at Enniscrone in 1998.

Gleeson beat reigning East of Ireland champion Reece Black 2 and 1 in the third round before Portmarnock’s Jack Pierse was forced to retire with a left knee injury as they played the 10th in their quarter-final.

Runner-up last year, Pierse got through to the last eight when leading qualifier Kyle McCarron from North West was forced to withdraw after three holes with a recurrence of a wrist injury.

But a few hours later Pierse was the man coming to terms with another bitter disappointment at Rosses Point, 12 months after losing to Barry Anderson in the final.

“I had hurt my knee yesterday and hoped it would ease out but was very sore all day and on the eighth, I turned towards someone when walking and I got a really sharp pain and couldn’t walk after that,” said Pierse, who had just gone three down when he conceded.

“I tried to hobble the next couple holes and actually hit it in close on 10 with my second but fell to the ground as I hit it and couldn’t get up. It’s very disappointing.”

Madden, who hails from Dungannon, knocked out Rosslare’s Gary Collins on the 19th in their unfinished second round match at first light, then defeated Holywood’s Rory Williamson 4 and 3 before completing a surprise, 19th-hole win over tournament favourite Robin Dawson from Tramore in the quarter-finals.

Dawson was two up after 10 holes but lost the 12th to a birdie and then three-putted the 13th to be hauled back to all square, eventually falling at the 19th when he missed the green left and failed to get up and down.

Brazill reached the quarter-finals last year and showed he’s ready to challenge for a big title after he beat defending champion Barry Anderson 2 and 1 Forrest Little’s Jack McDonnell by 2 holes in a tight quarterfinal.