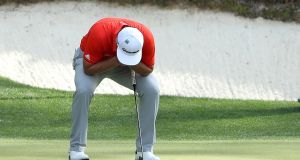 Jon Rahm of Spain reacts to a missed putt during the final round of the 2018 US Masters Tournament at Augusta National Golf Club in Augusta, Georgia. Photo: David Cannon/Getty Images

Jon Rahm will attempt to put his Masters disappointment behind him by completing his collection of national titles in the Open de Espana.

Rahm was in contention for a first major title at Augusta National until finding the water with his approach to the par-five 15th in the final round.

The 23-year-old had to settle for fourth place behind champion Patrick Reed, but is a strong favourite to bounce straight back with a victory at the Centro Nacional de Golf in Madrid, where he practised during his amateur days.

“The Masters was very special in the sense that it was the first time I’d played that good in a major, especially on the weekend, and also adding the fact that I started the week with a 75 and was nine shots off the lead going into the back nine on Friday and I was able to play really good on the last 45 holes or so,” Rahm said.

“When that ball was flying at the flagstick on 15, I really did have hopes that it was going to stick and I was going to have a chance of an eagle like Sergio [Garcia] did last year.”

The Open de Espana dates back to 1912, but was absent from the European Tour schedule last year due to financial issues.

It was last staged at the Centro Nacional de Golf in 2007, while England’s Andrew Johnston is the defending champion following his victory at Valderrama in 2016.

“I am blessed to be able to say I am Spanish Golf Federation national champion for the ages of under 16, 18, 21, and all ages,” world number four Rahm added. “I think it’s four or five different categories that I am champion of and some of them a couple of times.

“I took a lot of pride in winning those championships and it’s not easy. They were always very disputed and on the pro level it was sad for me not being able to play this event last year.

“But for this year to be a part of it and know all the Spanish legends have won it — I would love to add my name to the trophy.

“To be able to link my pro and amateur career to get this final stamp would be amazing. There is no better place like somewhere like this because I spent two years of my life practising on this range and golf course, so hopefully I can get it done this week.

“It would be a special moment because this is where I developed most of my golf skills. When I was in Barrika I could only go the golf course a couple of times a week, but when I was here I was able to practise a lot more and meet some of my team-mates and become really good friends.

“I think out of the four wins I’ve had my dad has been at two and my mum hasn’t been at any of them, so if I was able to win in front of them as a pro it would be amazing.”