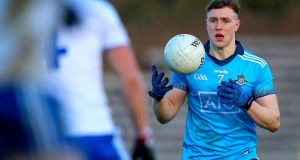 John Small: is facing a two-match ban and will miss the Mayo clash. Photograph: Tommy Dickson/Inpho

Moving day, to borrow the golfing phrase, beckons in the fourth round of the Allianz Football League for Division One title-holders Dublin – along with current leaders Mayo and Kerry.

After losing to Kerry last Saturday week, a second league defeat in their opening three games, Dublin are back in Croke Park this Saturday to face their next best rivals Mayo, currently on an unbeaten run.

Dublin manager Jim Gavin is still counting the cost of that defeat, defender John Small set to miss out after being proposed with a two-match suspension for his part in the mass shoving match in the immediate aftermath of that defeat in Tralee.

Kerry defender Brian Ó Beaglaoích was also hit with a proposed one-match suspension, Kerry manager Peter Keane indicating the player had accepted the ban and is therefore not available for their trip to Tuam where they face Galway on Sunday.

Gavin’s defensive absentees run a little deeper: Eric Lowndes is still nursing a shoulder injury which forced his half-time replacement against Kerry; Philly McMahon is also sidelined with a wrist injury, while Cian O’Sullivan, although present in Tralee, is yet to be included in any match-day 26 for 2019.

Dublin have yet to lose two consecutive league games under Gavin; the last time it happened was in 2012, under previous manager Pat Gilroy, when Mayo and Cork beat them on successive weekends, the Mayo game being a refixture from earlier on.

Keane is still short several first-choice players too. David Clifford is expected back after a shoulder operation in about three weeks, James O’Donoghue has returned to more regular training.

Forward Seáan O’Shea may yet be rested as he faces a Sigerson Cup final on Wednesday with UCC, who face St Mary’s at O’Moore Park in Portlaoise (7.30pm, live on TG4).

Galway will continue to be without forward Damien Comer for the remainder of the league, as he underwent surgery on the ankle injury sustained before Christmas when he was playing in a charity game. His target is a return for Galway’s Connacht championship opener against London in Ruislip on May 5th.