Premier County circle the wagons as the pressure mounts 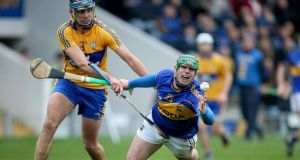 Few recent All-Ireland champions have worn the crown as heavily as the feted Tipperary hurling team of 2010. The thrilling nature of that famous win not only halted the Kilkenny immortals just one game short of an unprecedented five-in-a-row, it seemed to signal a definitive shift in the balance of power.

The almost casual authority with which the county’s U-21 side swept Galway aside in their All-Ireland final a week later gave rise to heady speculation of another golden era for Premier hurling. But it never transpired: Kilkenny have recaptured the Liam MacCarthy twice since that match and Clare – who weren’t even in Tipperary’s rear view mirror in 2010 – are the current holders.

Tomorrow, the Tipperary hurling community will gather in Semple Stadium to see their troubled senior side try to stave off deepening relegation gloom by beating Dublin. The metropolitans have not won a game of hurling on Tipperary soil since February 1946, when they won by 9-6 to 2-2. But that fact is of cold comfort when set against the reality of Tipperary’s current form. Last week’s defeat by Galway in Salthill seemed to pre-empt something of a general crisis of confidence within the county.

Eamon O’Shea, lauded as the key factor when he served as coach during Liam Sheedy’s managerial reign, put a brave face on the third consecutive defeat but acknowledged that losing to Galway was more disappointing than the previous defeats to Kilkenny or Clare.

Lucky win
On Ronan Quirke’s Monday evening radio show on Tipp FM, the comments ranged from pessimistic to despairing . . a lucky win against Waterford, something not right between the management and players, the defence, confidence etc. JJ Kennedy, the respected hurling commentator with the station, captured what he saw as the general mood in Salthill.

“Confidence is absolutely on the floor at the moment. It was glaringly obvious in Salthill yesterday that players were jittery and weren’t performing; they were standing back and didn’t want to be seen. You had all the hallmarks of a team where morale was absolutely broken and confidence just gone whereas Galway were really buzzing and were up for it.”

Tipperary’s dramatic slump has been the most surprising and most consistent thread in a wildly unpredictable series of games in Division One A. Their performances in the Waterford Crystal Cup, bright and energetic, suggested they were primed for a typically sturdy league run. They beat Waterford in hesitant fashion on the opening night of the league but since then it has been all downhill.

Against that, Eamon O’Shea made it clear from the outset that he wasn’t overly pre-occupied with league results. Ensuring that younger players gained experience before the team meets Limerick in the Munster championship in June was of key importance.

And if, in early February, you had shown Tipperary hurling fans the three scorelines Tipperary would produce in the league – 5-14 against Kilkenny, 0-20 against Clare (including 15 wides), 1-19 against Galway – they would hardly reflect a team on the ropes.

Alarm bells
It is the form – and composition – of the defence that has set alarm bells ringing. Declan Fanning, Tipp’s versatile defender who retired after the 2010 final, raised question marks about the defensive structure after the Clare game and the theme was taken up by JJ Kennedy this week.

“What annoys the public most is the way the team has been set out on different days. The central spine of defence against Kilkenny – and incidentally I think there is a false read on the Kilkenny match in that we got very handy goals that had more to do with diabolical defending by the Kilkenny fullback line than anything fantastic we did – which se t us up.

“The second half, there was only one winner in that match and we were well beaten in the end. Declan Fanning was right, particularly about defence which is your primary concern to sort that out. We were just all over the shop.

“And we are playing players all over the field in different positions as if it doesn’t matter what position you play in – instead of trying to get fellas into their best positions. Michael Cahill has been a prime example of that – he was taken off yesterday, I think there was some bit of an injury. But he has been shunted all over the place. We have had Kieran Bergin in the forwards, we left off Conor O’Mahony for the Clare match for ‘tactical reasons’. That was the statement given. So I feel we have to go back to basics and sort out that defence.”

When Tipperary picked their team for their visit to Galway, they seemed to have done that. Conor O’Mahony, seen as a steadying influence at number six, was restored, Pádraic Maher was selected alongside him and Michael Cahill was selected in the full back line. But their presence couldn’t prevent Galway from scoring three goals in the first half, bringing Tipperary’s total goals conceded to 12.

Jaunty bounce
Galway, seeking their first win against Tipperary in seven league seasons, played as if unburdened, with Conor Cooney’s jaunty bounce pass from the hurl illustrating the fact that the home team were enjoying themselves. It echoed Eamon O’Shea’s assertion following the Clare defeat that the management wanted to see the Tipp’ players enjoying their hurling. After the Salthill match, the manager offered a measured reflection of the team’s form to date.

“I think our hand was a bit tied in the Clare match in the sense that we were missing a good many players. We were very disappointed to lose to Kilkenny, we had really targeted that game. In the Clare game, we had set up in a way that was successful last year against them and also the Crystal and in fairness to them, they came on very strong.

“But I was more disappointed to be honest against Galway because we had a lot of our regulars back. We are trying to get to a position where we are finding new players but that is no excuse for some of the performances which haven’t been good enough.

“We have played well in snatches – we played well against Kilkenny for a good period, for 25 minutes against Clare. In Salthill we won the second half by five points. I am only pointing out those; I am not making excuses. We are trying to get to a position where we will be competitive down the line. Sunday is a big game for us – the atmosphere is really good in the camp. We are just not getting it on match day.”

O’Shea might well be taken aback by the level of anxiety. The team has played just four league games: the season has hardly begun. One of their three defeats was away to Kilkenny, hardly a gimme. The other was against the All-Ireland champions currently playing with confidence. The Galway defeat has put the squeeze on.

There are mitigating factors. The U-21 victory of 2010 did not bring the anticipated rush of new senior talent. With Paul Curran on the long-term injury list, Tipperary are missing an obvious fullback. Only Lar Corbett knows whether his future as a Tipp hurler is already behind him. In a broader context, Tipperary’s defeat in last summer’s humdinger qualifying match to Kilkenny in Nowlan Park all but wiped away the 2010 co-ordinates.

Three years after making it to the summit, Tipp did not even feature in the last eight. Getting back there – and further – is Eamon O’Shea’s primary ambition for his team.

Decent stab
Most Tipperary fans could make a decent stab at naming the side which will start against Limerick in the championship. Surely O’Shea has an obligation to use the league to give players an opportunity in different positions; to discover what works and what doesn’t? He has earned his reputation of one of the most respected and original coaches in the game. His selectors Michael Ryan and Paudie O’Neill both hurled as defenders. If spectators can see the problems, they can. Rectifying problems for the championship remains the ultimate task.

It could be the current anxiety reflects a more general disappointment at how Tipperary hurling has fared since 2010. The golden future has not materialised and the prospect of a drop out of the top division is causing ripples in the county.

Tipperary have been relegated just three times: in the spring of 1978 when they bounced back the season after and in 1982-83, a drop which saw them lose to Westmeath the following year. A defeat to Laois saw them demoted at the end of the 1984-85 campaign.

The 1970s and most of the 1980s were a write-off and relegation this season would be a painful reminder of those lost summers.

But there is a lot of hurling to be played between Tipperary and relegation. Eamon O’Shea has been around the game long enough to know that league crises are as frequent and soon-forgotten as spring rain showers.

So the Tipp fans will take shelter under the comforting familiarity of the hooded stand at Thurles as the clouds darken and a fascinating afternoon of hurling unfolds.