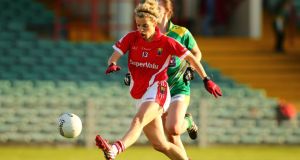 Eamonn Ryan’s remarkable Cork are through to a 10th TG4 All-Ireland final in 11 years.

The Rebelettes saw off Munster rivals Kerry by 13 points at the Gaelic Grounds on Saturday evening to set up a September 27 clash with Dublin or Armagh.

It will be Cork’s fifth successive final appearance as they go in search of a 10th Brendan Martin Cup success – and the five-in-a-row.

And this revenge victory over Kerry continues Cork’s brilliant record in the All-Ireland series over the past 10 years.

Unfortunately from Kerry’s perspective, history repeated itself here as Cork unloaded with an avalanche of second-half scores.

Ryan said: “I wasn’t that happy in the first half, I thought we could have scored a bit more.

“We over-elaborated a little bit, they were compressing the space in front of the goal alright so that would account for it but they kept at it and got their reward in the second half. Eventually, they managed to break down the defence and took some great scores.”

And Ryan admitted he was pleased to get one over Kerry after the nine-point Munster final reverse. He added: “Play as well as you could, that’s what we were trying to do. We didn’t do it in Mallow obviously, played well against Galway (All-Ireland quarter-final) and played a tiny bit better today again.

“It’s an inexact science, you just try to stick to general principles and work as hard as you can. They were well-taken scores, I thought we could have kicked four or five more points. But that’s looking for perfection – you won’t ever get that. I was happy enough. After Mallow, I was worried. Not so much that we were beaten by eight or nine points, that can happen, it was the performance.

“We just didn’t perform and I just couldn’t figure out why because training had been going great.”

Four points ahead at half-time, 2-5 to 0-7, Cork upped the ante after the break to blow Kerry away. Valerie Mulcahy bagged her second goal midway through the half to put the end result beyond any doubt and sub Eimear Scally bagged Cork’s fourth goal late on.

And yet Kerry had been a point clear, 0-3 to 0-2, when Cork struck for their opening goal.

Captain Ciara O’Sullivan was alive to the restart and as Kerry cheaply lost possession, she placed Áine O’Sullivan for an open goal.

Kerry’s response was good, however, and they remained very much in touch before Cork netted a second goal.

Three minutes before half-time, ace corner forward Valerie Mulcahy pulled a rabbit out of the hat when she deftly chipped Murphy.

That piece of individual genius put Cork 2-5 to 0-5 clear but Kerry scored a couple of cruciate late scores to remain in touch at the break.

Sarah Houlihan kicked two points approaching the interval and the final score of the half sailed over the bar just a few seconds before the half-time hooter.

Four points down at half-time, Kerry were still very much in the hunt but they will have been annoyed to concede two goals after working desperately hard early in the game to turn over Cork when the Leesiders looked to attack.

But Cork took over in the second half as Kerry had Emma Sherwood and Bernie Breen sinbinned.

Sherwood was followed to the line by Cork’s Ciara O’Sullivan and Kerry finished the game with 14 players when Breen was yellow-carded with six minutes left.

Cork finished the game with ten different scorers as Lorraine Scanlon and Sarah Houlihan battled valiantly to the finish for Kerry.

Ireland rugby star Louise Galvin came off the bench at half-time but could do little to stem Cork’s second half momentum.

1 Farrell and O’Connell provide insight into changes in Ireland’s analysis
2 Sideline Cut: Vignette shows why Bird is the true shark in The Last Dance
3 Andrew Porter diary: Meat, veg and intermittent fasting the order of the day
4 Aidan O’Shea sees both sides of the equation when it comes to professionalism
5 Louise Galvin’s rugby career on hold for work on the frontline
Real news has value SUBSCRIBE

Anfield and Cheltenham show sports again lacking in looking after their own 07:00
Louise Galvin’s rugby career on hold for work on the frontline 06:30
Jack McCaffrey praises GAA’s community effort during Covid-19 outbreak 06:00
Aidan O’Shea sees both sides of the equation when it comes to professionalism 06:56
Farrell and O’Connell provide insight into changes in Ireland’s analysis 06:00
Crossword Get access to over 6,000 interactive crosswords