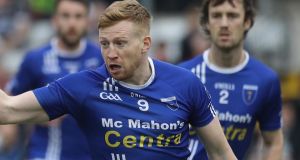 Kieran Hughes’s sending off saw Scotstown drift out of the game against Burren. Photograph: Lorraine O’Sullivan/Inpho

Scotstown held off a fast-finishing Burren side at Páirc Esler in Newry and only had themselves to blame for not being out of sight after a wayward first half in which they dominated.

The Monaghan champions had 19 attempts in the first 30 minutes and put a whopping 13 of them wide, most of which were scoreable. They did find the target with the other six.

Scotstown’s 11th wide of the half should have been a goal but Orin Heaphey somehow managed to fire wide with the goal at his mercy and they went in 0-6 to 0-3 ahead at the break.

Scotstown hit the opening four points of the second period courtesy of the superb Kieran Hughes, Shane Carey from play, Rory Beggan from a free and a driven effort from Francis Maguire.

Ryan Treanor, only on the field a couple of minutes, got Burren ticking with a converted free on 41 minutes and while Carey knocked over another placed ball at the other end two minutes later, it was to be their final score until the first minute of stoppage time as Burren desperately tried to haul themselves back into the match.

It wasn’t surprising given the man that was making them tick, Kieran Hughes, was black carded on 44 minutes and once that happened, Scotstown drifted out of the game.

Donal O’Hare rattled off three frees in succession for Burren to close the gap to 0-11 to 0-7 with 10 minutes remaining. A towering score from Seán Murdock reduced the gap to the minimum on 57 minutes and there was controversy in the final minute when Burren’s Ryan Treanor was taken out just as he entered the large square.

Tyrone referee Seán Hurson waved his arms to say that there was no foul in his eyes, much to the consternation of the Burren players and management.

That seemed to signal an end to the Burren fightback, despite there being five minutes of stoppage time signalled, with Carey converting Scotstown’s first score in 18 minutes to put his side two clear.

Burren sub David McEntee was then shown a straight red card for an incident involving Jamie McCarey before Donal Morgan made it 0-13 to 0-10 in the sixth extra minute.