Pressure is on as the Kingdom come to Clones

With Kerry still smarting from defeat by Galway, this could be Monaghan’s chance 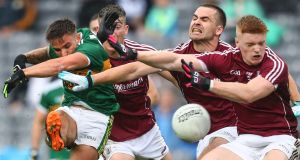 “There is a waning in this Kerry team and I think Monaghan could just get them at the right time,” Hughes, a key figure on the last Monaghan side to reach an All-Ireland semi-final in 1988, informed The Irish Examiner.

“It is a good Kerry team, but not a great Kerry team,” he added in a highly quotable monologue that touched against the irrelevancy of Kerry’s minor All-Ireland monopoly come throw-in at St Tiernach’s Park.

If that fails to induce suffocating pressure on fresh-faced Kerry footballers fast-tracked into senior green and gold, then the columns of predecessors might tip the scales.

“I remember numerous times walking in on conversations that stopped suddenly as soon as people saw me. They knew who I was and who I was related to,” so wrote Darragh Ó Sé when comparing present days to the 11-year drought eventually ended by his uncle Paidí.

Seán O’Sullivan was a head-shaven, point-slicing wing-forward who gathered four All-Ireland medals back when Kerry last ruled Gaelic football. Nowadays he manages Mid-Kerry but, writing for The Kerryman, he revealed some worrying traits about the modern panel’s preparation before losing to Galway last week.

“We were lethargic in our thinking, our decision-making, and our body language was poor,” said O’Sullivan. “I particularly noticed a sluggish approach in our warm-up. From the outside looking in, it looked sluggish and sloppy and that continued in our performance.”

These former team-mates of Éamonn Fitzmaurice avoided criticising the Kerry manager (David Moran, along with other established players, had his card marked) but that will surely follow defeat in Clones. That and all the other horrible fallout stories, like Shane Enright’s mother being told off about her son at the Listowel Races last year, and plenty more besides.

“What was said was just something over the goal the second day which Andy Moran got,” said Enright, who may return to the team this weekend having recovered from a knee injury. “She didn’t know them very well anyway. Ah, she wasn’t too upset, she takes it in her stride as well.

But it’s not a nice thing to happen.”

Bryan Sheehan earned his Paddy Power fee when writing about “a gun to the head” of the players in a jersey he recently returned to the pile.

It will be a fully unique occasion, like Dublin in Omagh on Saturday. Monaghan have beaten Kerry in the last two league meetings, but five championship defeats and a draw harks back to their last great opportunity. The 2007 All-Ireland quarter-final lingers in memory as the champions needed Kieran Donaghy at full stretch along with the magnificence of Sheehan and Tomás Ó Sé to flip a nagging three-point deficit.

“Oh, I was there,” Darren Hughes told The Irish News. “There’s no doubt about it, we left that behind us.

“It’s great. We have the two points on the board, the pressure is on them to show what they’re made of. We fear no one. We’ve played all these teams and we’ve beaten them in the last few years so we know on our day, if we get the performance levels right, that we’ll not be far away. It’s important to continue that.”

Nudie Hughes offers perhaps the most interesting dose of reality.

“We’ve always said we’d like to see what Kerry are like when they are out of Croke Park and out of Fitzgerald Stadium for a championship match. We have got that opportunity. Monaghan will relish the thought of playing them at home.

“There is experience and there is youth [in the Monaghan team]. It is serving us well. We do know the Kerry defence leak scores. I am hoping this weekend will be no different.”

Roscommon manager Kevin McStay has named David Murray at corner back, despite concerns of suspension due to the accumulation of black and yellow cards, ahead of Donegal’s visit to Dr Hyde Park for Saturday’s All-Ireland football championship round robin tie.

Sean McDermott comes into the fullback line while Brian Stack at full forward is the other change from last week’s heavy defeat to Tyrone.