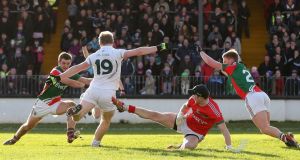 The O’Byrne Cup champions extended their winning streak after this unexpected shoot-out on the plains. If the black card-advocates want a perfect illustration of the potential effect of the new rules on the mindset of the players, this game had it all. Both teams attacked each other with abandon and the black cards issued to Mayo’s Aidan O’Shea and Kildare’s Paul Gribben were caused by clumsiness not cynical play.

After that, defenders were tentative and attackers reaped havoc, none more so than the Lilywhites’ Paddy Brophy, who shot a sensational 0-6. He saved his best for last: an injury-time winner from over 30 metres after Kevin Murnaghan carried the ball purposefully into Mayo country and David Hyland provided the assist pass.

The locals were euphoric and the strong Mayo contingent in the crowd of 6,015 saw this season begin just as last year’s ended: with a one-point defeat. With 41 scores – many of exceptional quality – nobody could argue that the game wasn’t worth the admission price.

Cricket scores
But as news of other cricket scores around the country arrived via transistor and Twitter, a few brows creased in worry. Is Gaelic football in danger of losing the fine art of defending?

“There was great scoring all around in the first round of the league,” said Mayo’s James Horan, one of Mayo’s purest attackers in his playing days.

“But anyone who saw Croke Park yesterday....I don’t know what the tackle count was but ...players out there are afraid to tackle. They are afraid to tackle because of the uncertainty. So if you want a game full of running with no tackling and, you know, tackling is one of the best skills of the game. That is where we are going . . .”

After a winter break in Dubai, Mayo got three full training sessions before meeting this Kildare team who have been going hard since early December. They coughed up three first-half goal chances to Mayo, with Aidan O’Shea causing immense damage every time he rumbled forward and Cathal Carolan drawing a fine, stretching save from Shane Connolly.

Then Kildare’s goal came from a familiar source.

Tomas O’Connor has a habit of for ghosting around the fringes of the opposition goalmouthand when Darroch Mulhall sent the ball in O’Connor rose above Kevin Keane to claim the ball and fire past Robbie Hennelly.

That goal was the centre point of a stirring ten-minute period for the Lilywhites who hit 1-4 without reply and they resumed their shoot-on-sight approach after half-time with Brophy landing another sweet point.

Fine goal
Mayo almost fell into a hole about ten minutes into the second half, trailing by 1-13 to 0-10. Then the match went bananas.

Jason Gibbons raised the Mayo heartbeat with a fine goal through the middle and then Daragh Coen finished a terrific crossfield pass from Andy Moran to level the match at 1-13 to 2-10. Kildare’s Eoghan O’Flaherty replied with Kildare’s second goal and from then to the whistle, it was blow for blow. All bar two of Kildare’s scores were from play: Kevin McLoughlin took on free-taking duties for Mayo and landed 0-6 of his eight points from placed balls, including a pressure free to level the game on 70 minutes.

Mayo probably deserved a draw. The luckless Tom Parsons, back after a couple of miserable seasons ruined with injury, was taken to hospital with an facial injury just ten minutes into his comeback. The visitors enjoyed some encouraging performers from new faces like Adam Gallagher, Diarmuid O’Connor and David Drake.