Midfielder turned full-forward has several strings to his bow, as shown already 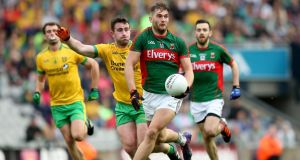 Aidan O’Shea in action for Mayo during their All-Ireland quarter-final against Donegal at Croke Park. Photo: James Crombie/INPHO

Aidan O’Shea may be a natural midfielder-turned-full-forward – but he has shown this summer that he has a lot more to offer at 14 than a plain aerial threat.

In fact, while his goal against Donegal in the All-Ireland quarter-final may have seen him out field and subsequently shrug off the attentions of three defenders, O’Shea got his hands on the ball around the square just the once over the 70 minutes.

Moreover, he won just three of the seven balls kicked in between him and Donegal’s All Star defender Neil McGee during the first half, faring far better with ball that was hopped in front of him or floated for him to run on to than those which were hit in hope from further afield. Like most natural midfielders, the big Breaffy man steps his way under a high ball, rather than stationing himself deeper inside and leaning back or twisting his marker.

There still remains plenty of confusion over the role in which he actually occupies though. O’Shea spent 75 per cent of the match against Donegal operating as an orthodox full-forward. He was available for long direct ball, diagonal ball, but particularly for ball played outside of him on his left facing out the field.

It’s no surprise the left-footer made most of his runs into his favourite right corner/half forward pocket, turning and teeing himself up for efforts or more often than not lay-offs on his more comfortable side. The throw-ins at the start of each half were the only times in which O’Shea actually contested a ball around the middle third – and while he remained in a deeper role for the opening two minutes after the first throw-in, he would return to the forward line practically until the final quarter.

Then from the 53rd minute onwards he came back to make nine of his 15 involvements outside of Donegal’s own 45. Minus the two throw-ins, and that’s almost 70 per cent of his “midfield” play coming when Mayo were closing the game out. So essentially, it’s safe to say O’Shea is now Mayo’s full-forward.

While being well shackled by McGee for much of that first half, a performance for which the teak-tough defender earned little credit (before being replaced in the second half due to an injury), O’Shea still played a part in five of the eight Mayo scores before the interval. His distribution via the handpass and short footpass, and his ability to draw frees, highlights the strings in his bow beyond an ability to catch and carry.

A goal per game

So far this championship, O’Shea has scored 4-5 in three championship games, and 1-8 during seven rounds of the league. That averages out at a goal per game for 2015. And in truth the raising of a green flag, or several, is the biggest threat the 6ft 4in and 15 stone attacker has in his armoury.

O’Shea has never been the most prolific of scorers; he has 8-16 since making his championship bow against New York in 2009. All of 7-10 of that arrived in his debut season and this summer combined – both of which he predominantly operated in the inside line.

Last summer, while fluctuating between a midfield and more advanced role, O’Shea also managed the crucial goal against Cork in the All-Ireland quarter-final. His average score per game in championship football is 0-1 per game, while during the summers of 2009 and 2015 that rises to 1-1 – again highlighting his goalscoring threat whilst playing as a forward.

Yet if McGee was a tough marker, the Mayo full-forward will get little more respite this weekend. O’Shea started at full-forward in the league defeat to Dublin last March and failed to score with Rory O’Carroll at full-back for Dublin – the man he will no doubt come up against again this Sunday. O’Shea has actually failed to score in his two championship games against Dublin so far, but has 0-5 in seven league games. Although he’s unlikely to have occupied the inside line for as long as he will on Sunday in any of those games.

O’Carroll will have learnt from previous duels against a similar opponent in Donegal’s Michael Murphy. Murphy, who would be very similar to O’Shea in terms of his physique as well as his positional flexibility, has scored 1-4 from play in three games up against the Dublin defender (two senior and the Under-21 All-Ireland final). Although by all accounts he competed well on each occasion.

Mayo are unlikely to view the 2013 All Star defender as that aerially suspect so as to pepper him with an avalanche of high balls like they did to Sligo in the Connacht final. But whatever way they play it - long, short, wide or bringing him further afield - their talisman will be able to adapt.

The Connacht champions are by no means entirely reliant on O’Shea though: they have averaged over eight different scorers per game so far this summer, while the ever-reliable Cillian O’Connor has 1-19 in three games.

O’Shea’s physical presence is no doubt freeing up the talents of O’Connor and co, and his own goal threat has helped Mayo to an average tally of 3-18 per game – but his ability to pick a pass, off load in the tackle and time his runs into the space shows that he’s far from just an edge of the square target man.

Connacht continue player hunt as six academy graduates promoted 16:41
Forever In Dreams leads big names for return of racing at Naas 16:21
Second division clash to get the ball rolling in Spain after three-month pause 16:20
Bundesliga will take no action against players supporting George Floyd protests 15:41
Son raring to go after completing military service in Korea 17:01
Crossword Get access to over 6,000 interactive crosswords