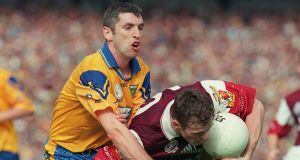 Jarlath Fallon of Galway keeps possession despite the attentions of Roscommon’s Damien Donlon during the Connacht final in 1998. Photograph: Inpho.

Warren Gatland may have found himself on the wrong side of public opinion in Ireland from time to time over the years, but there is one part of Ireland that should forever hail the antipodean master of the pre-match soundbite because, if it wasn’t for him, Galway might never have won the All-Ireland football final in 1998.

As it was, the then-Connacht rugby coach never did manage to secure the signature of a young rugby player on his radar called Jarlath Fallon. Ja went back to the Galway footballers, and ended the year with a Connacht title, an All-Ireland medal and an All-Star award.

Roscommon have cause to rue Gatland’s change of heart, because they had their foot on the throat of Fallon and that Galway team twice in ’98, drawing the Connacht final in Tuam, before only losing to a freak goal in extra-time in the replay. And as the final whistle blew last Sunday, many minds no doubt wandered back 18 years to a similarly foul Galway summer’s day when the two counties played out a dour draw that ended level after a late free (Roscommon’s Donie Smith doing the honours last week, Neil Finnegan hitting the late leveller for Galway in 1998).

“Looking back on my rugby days, I probably fell between two stools a little bit, between the amateur and professional eras. Back in 1993 I got a few caps for Connacht, I went to an interpros series in Scotland, which was the beginnings of the idea of a Celtic League I suppose. I was tinkering with it for a couple of years after that, but I gave it one big year in 1997.”

Fallon was good enough in that 1997/’98 rugby season to think seriously about ditching Gaelic football, despite the fact he was already a Connacht-title winning captain of Galway, and an All-Star from 1995.

Galway went to Castlebar in May and beat hot favourites Mayo, who had lost the previous two All-Ireland finals. They defeated Leitrim in the Connacht semi-final, before drawing with Roscommon, 11 points apiece in Tuam. Fallon was feeling his way back into form, before he finally caught fire in the replay in Roscommon.

He scored five points from play that day, but it was a shot of his that dropped short in extra-time that would prove to be the decisive moment. It was a weak effort that was easily picked up by Roscommon goalkeeper Derek Thompson, but as he moved to hand-pass the ball to a colleague, it fell from his grasp and Michael Donnellan was on hand to blast it into an empty net.

Thompson remembers the drawn game and the replay as being the reason why he got interested in the game in the first place. “Going to Tuam, and playing in front of a huge crowd in the Hyde, that’s what it was all about when you were a kid, playing these lovely provincial venues in the Connacht championship – all the history and everything.

“We all go back and blame [the referee] Séamus Prior for the decision to award Galway that free in the closing moments. But, no more than last Sunday, everyone wanted to see both teams go at it again in better weather after the drawn game in Tuam.”

They did indeed go at it again in the Hyde, and played out a dramatic, physical, end-to-end tussle that could have gone either way. It finished 1-17 to 0-17 after extra time, and Fallon remembers a much-improved Galway performance that still wasn’t enough to shake off Roscommon.

Thompson remembers it pretty much the same way. “As good as Galway played, we still wouldn’t go away. All we needed was a shove to help us over the line . . .”

Instead, what Roscommon got was a stroke of bad luck. And 18 years later, Thompson is philosophical about the goal that decided the game.

“Roscommon people were great about it, but it was a defining moment, no doubt about it. I remember sitting on my couch late one night a few months later in Dublin watching the video, going through it frame by frame trying to figure out what happened.

“It’s what people always want to talk about. The RTÉ coverage started with it on Sunday of course, and a few people around me were annoyed about that, saying would they ever leave it alone . . . but of course they’re going to show it. That’s the moment that decided the game and, if there’s a draw in 10 years’ time, they’ll use it again, it’s only natural.”

As he says himself, the events of the last couple of months have fairly put it in perspective. Thompson woke one night in March at 4am, “having a full belt of a heart attack, at 44 years of age, so that wasn’t on the cards. An hour and 20 minutes after the ambulance was called, I had two stents put in at the Mater, so life has changed a bit for me now. I’m back to work but I’ll be slowing down and minding myself.”

The feeling that 1998 was a missed opportunity won’t go away. “When Galway won the All-Ireland there was certainly a feeling that it could’ve been us. We wouldn’t have feared Derry in the semi-final, and getting to play Kildare – the Dermot Early connection, there would’ve been massive nostalgia. Ros last won an All-Ireland in 1944, then 18 years after that we got to a final, in 1962. Eighteen years after that we got back to another final, in 1980. So who broke the 18-year cycle after that only myself. And now its 18 years since ’98, so who knows . . .”