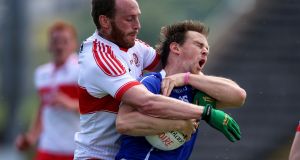 Hot-shooting Derry caught Cavan with a classic back door ambush in the last quarter to deservedly book their place in the last 12.

The Blues’ long-suffering standing army of supporters can famously be mobilised at the drop of a hat - or the fortuitous bounce of a ball in a humdrum qualifier - and while the old ground wasn’t packed here, by 3.48pm, it was fairly rocking.

By that stage, Terry Hyland’s men were humming nicely. Cian Mackey and Dara McVeety were scorching the earth and fired over three from play between them, with Martin Reilly adding another, as Cavan led 0-8 to 1-2.

Derry had been reliant on pot shots, Mark Lynch and James Kielt firing over huge points and Emmet McGuckin out-fielding Rory Dunne to punch home the goal that kept them in touch.

And when Kielt was black-carded after tangling with Conor Moynagh, and the defender dusted himself down to create a chance which Sean Johnston converted, it seemed as if Cavan would win this with something spare.

In the 10 minutes before the break, though, there were a few subtle changes which tilted the balance. Derry goalkeeper Thomas Mallon began to finally gain some traction with short kick-outs and still, there lingered signs of nerves in Cavan’s play. They made mistakes coming out of defence and kicked six first-half wides and with Ciaran Mullan now keeping tabs on Mackey, the game took on a different complexion.

That visage was pock-marked further for Hyland when defender Feargal Flanagan saw red for an off-the-ball incident with Lynch and although Gearoid McKiernan kicked a couple of big points before the break, it looked sure there would be a run on the four-point bank Cavan had worked so hard to squirrel away.

Within four minutes of the restart, it was down to two when Conor McAtamney and Lynch, from a free, raised white flags. Cavan were still running up blind alleys and were slow to get up in support as Derry looked to turn the screw.

Two long-range frees from goalkeeper Ray Galligan, either side of a Lynch point, kept Derry at arm’s length but Cavan’s ship was beginning to spring leaks on port and starboard.

Johnston inexplicably missed a 20-metre free and Derry drove forward, Danny Heavron firing over. Lynch was next with a free, then sub Niall Toner scored twice, with another Galligan effort all Cavan could muster.

Derry were at full tilt now and their numerical advantage showed. A third for Toner was followed by the leveller from a Niall Loughlin 45 with nine minutes to go.

Derry raised again and, with the pot on the line, Cavan folded. With five minutes to go, a Lynch free nudged them in front for the first time in an hour.

Back came Cavan and McVeety but the tide was flowing in one direction and huge points from McGuckin, Lynch and Enda Lynn in a devastating final couple of minutes saw Derry surge clear.

Cavan had one late, desperate chance but sub Gerard Smith’s effort, in a scramble, went over, rather than under, the bar. And that was that; in a game of typical Ulster pinball wizardry, it was the underdogs who magicked up the shimmering of class that made the difference.

1 ‘For 25 minutes I ran out of oxygen’: Pepe Reina on his coronavirus battle
2 Australian rugby staring into abyss as another crisis hits
3 Garry Ringrose to stay with Leinster as he signs two-year central contract
4 My favourite sporting moment: Game, set and couch as Borg takes down McEnroe
5 Playoffs set to be moved again as Uefa prioritise European club competitions
Real news has value SUBSCRIBE

Playoffs set to be moved again as Uefa prioritise European club competitions 15:59
Harrington would prefer 12 picks over delayed Ryder Cup 09:06
Australian rugby staring into abyss as another crisis hits 09:03
Ringrose set for new central deal; memories of Björn Borg at Wimbledon 06:51
Seán Moran: What nostalgia tells us about how the GAA sees itself 09:05
Crossword Get access to over 6,000 interactive crosswords