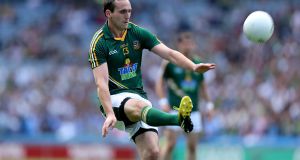 Graham Reilly: together with Cillian O’Sullivan and Eamon Wallace he forms a potent Meath half forward line. Photograph: Ryan Byrne/Inpho

Meath’s half forward line contains three of the paciest forwards in the land and they can ask major questions of the Dublin defence this Sunday.

Not even the proudest Meath man goes into this weekend’s Leinster semi-final harbouring utmost confidence in the 21-time provincial champions pulling off a win. But come match day and give the Royal County’s supporters and players any inkling of an upset and that stubborn belief will quickly return and fill Croke Park – with the raise and drop of a green flag.

Meath’s half forward line of Graham Reilly, Cillian O’Sullivan and Eamon Wallace allow Meath to set up deep – while still carrying a dangerous attacking outlet. Ultimately though the ability to score goals will prove decisive.

Mick O’Dowd’s team set up (for the most part) with the three half forwards dropping deep with Mickey Newman on the D behind Andrew Tormey and Dalton McDonagh. Closely knitted together.

And while Tormey and Wallace, O’Sullivan and Reilly, McDonagh and Newman are all interchangeable – with the three speedsters dropping back Meath have a serious counter attacking threat.

During a disappointing league campaign, from the games they started in the trio hit a combined average of 0-6 per game. 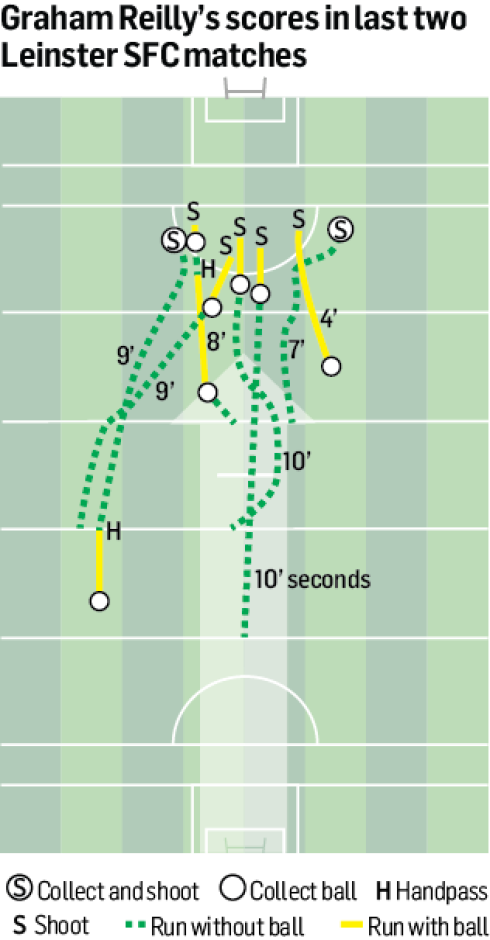 O’Sullivan was Meath’s great hope before spending the last two years sidelined with a back injury. He’s whet the appetite in the county upon his return though, with pace to burn he’s always looking to offload possession quickly.

Underage Irish sprint champion Eamon Wallace has had injury problems too in recent seasons but in four starts during this year’s league and championship he has already amassed an impressive 1-10 from play.

The main threat to Dublin though comes from Reilly. In the four championship games he has played over the last two seasons he has 1-14 bagged from play. Whether at 11 or playing at left half froward with O’Sullivan pulling the strings from the centre – Reilly hangs back, covering space. Lurking. Not doing much in a defensive capacity to be frank.

In fact between the three half forwards they only managed the one turnover against Louth. It’s the threat they carry going in the other direction though that could crucially force Cian O’Sullivan out of his sweeper role.

The St Colmcilles attacker is a hit and run specialist. In his last two Leinster championship games, from the time he becomes involved in the attack to when he converts, his seven points average just over eight seconds . Often breaking from his own half back line and raising a white flag just outside the opposition 21 metre line in that time.

His importance was highlighted last summer against Westmeath when wrongly dismissed on a black for a perceived trip. His team were seven points ahead after 46 minutes, he had scored four. In his absence Meath would score only four more times.

His threat may well catch the Dublin sweeper’s eye and when he does push up Meath need to capitalise – with goals. Against Louth they converted none of six chances. In the last 18 games stretching across two league campaigns, the Louth game and last year’s championship – they’ve scored 17 goals. And also conceded 17. The last time Dublin lost in Leinster, Meath scored five goals to prevail.

It’s 14 years since a club from Meath won a Leinster senior club title. There's no doubting that the county are in the midst of a famine. This team doesn’t contain the steel or talent of Kevin Reilly, Anthony Moyles, Nigel Crawford, Joe Sheridan or Stephen Bray. Not to mind what came before them.

But Paddy O’Rourke, Donal Keogan, Reilly are top players. While the likes of Pádraic Harnan, Donncha Tobin, and Harry Rooney have a bite about them for a championship scrap.

Some of their tactics at times though stretch back to the glory days. For instance against Louth, despite having one of the best goalkeepers in the game, Meath went long with 67 per cent of their kickouts. Predictably winning 50 per cent of those. Such simplicity - man on man football - will be music to the ears of many Meath fans. But that naive approach will happily be brutalised by Dublin.

This fixture doesn’t carry the traditional weight it once did but if Meath are patient, disciplined – with that pace in their attack they may just make a Meath-Dublin game out of it.