Austria to allow golf and tennis to resume from May 1st 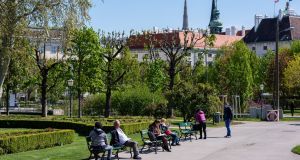 People enjoy the sun in the reopened Volksgarten park in Vienna on Wednesday following an easing of restrictions during the coronavirus crisis. Photograph: Thomas Kronsteiner/Getty Images

Austria, which has started loosening its coronavirus lockdown, said on Wednesday it would allow some sports compatible with social distancing like tennis and golf to resume from May 1st.

The Alpine republic acted early in its outbreak to close restaurants, bars, theatres, schools, non-essential shops and other gathering places roughly four weeks ago. The public have been told to stay at home and work from there if possible.

Unlike in some other countries, however, members of the public have remained relatively free to do exercise like jogging or cycling, provided they respect social distancing rules.

There is no need for a note as in France nor is there a limit of one outing per day as in Britain.

“Of course, individual sports where there is no immediate contact will be given priority more quickly over team sports where contact is generally unavoidable, or contact sports,” vice-chancellor Werner Kogler, who is also sports minister, told a news conference.

Outdoor facilities that will no longer be off-limits to the public include athletics tracks, tennis courts, golf courses, equestrian centres, shooting ranges and archery ranges, he added.

He said dangerous outdoor sports like ski touring, which is often conducted away from ski resorts, would be allowed but he urged those doing them to stick to “something easy” to avoid accidents.

Austria has reported 393 coronavirus deaths in total so far, fewer than some larger European countries have been reporting daily. It has had more than 14,000 confirmed cases.

There was frustration in Vienna that some of the capital’s biggest parks, like the grounds of the former imperial palace at Schoenbrunn, were closed, but those reopened on Tuesday, the day that Austria first loosened its lockdown by letting DIY stores, garden centres and smaller shops reopen.

Roughly 600 top athletes will be allowed to resume training, including indoors with stricter limits on distancing, next week.

Plans are also being made to restart Austria’s top soccer league, with strict testing requirements and matches being played in empty stadiums.

As for how sports like tennis should be practiced safely, Kogler said that was best left to federations.

“It is hard to believe some of the questions that come up – what about the ball? What about handling in the literal sense?” he said.

Initial consultations with tennis federations had produced 10 recommendations, such as marking players’ balls so their opponent does not touch them and different “behaviour at the net”, Kogler said.