Louise Phillips: “We had a desire to create something really special here and it was important to keep the integrity of the original build” 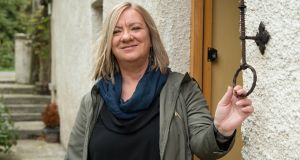 Louise Phillips: “It’s been about this house working around family needs and requirements, so it was hugely important for us to have the space for extended family.”

Louise Phillips and her husband stumbled upon their home in the Dublin mountains more than 20 years ago. It was an incredible find on a normal Sunday drive, she says, but one that fulfilled a dream the writer had to find a place to live and work beyond the city streets of her childhood.

An award-winning author, Phillips has published four psychological crime novels and is currently putting the finishing touches to a fifth, at the property that overlooks the Glen of the Small Valley. Back then, it was a ramshackle cottage in need of much love and at that point, the couple weren’t even in the market for a new house. They also didn’t know if the 250-year-old structure was salvageable, who owned it or if it would ever come to market.

Fate intervened and a chance phone call with her brother confirmed the house was, in fact, for sale and so began a long, arduous journey to, firstly, make the property their own and, secondly, get the planning permission they needed to restore it.

“When it was going up for auction we’d see all these really expensive cars outside the house and we were in our little Ford Fiesta thinking we haven’t a hope. We got lucky, the person selling it lived nearby and he was conscious of who he wanted it to go to, so it was the unusual situation of not necessarily the highest bidder getting it but the person he felt was most suited to the home,” Phillips says.

The former owner hailed from the tight-knit local community, which lies just shy of a Special Area of Conservation in the Dublin Mountains and he knew the importance of letting the house go to the right people. For him, that was Phillips and her family.

“There is such a mix of people living here, from farmers to artists, there’s an ethos for people who want to live in a rural setting like this that is also so close to the city,” she says. It took them six years to get planning permission to restore the cottage but as there was so much history attached to the property, Phillips was able to use her skills as a researcher to dig out its Griffith Valuation papers from the National Library, which she used to help her build a case to the local council for saving the structure. By that stage, she had about 20 or 30 historical references to put to them.

“The Griffith’s valuation papers survived the Civil War so I was able to trace the family, and in that research I discovered the house was owned by a family called the Kearneys. Rumour has it that the attic bedroom I write in was the last place Robert Emmet and his crew hung out before they went their separate ways.”

Phillips is currently writing her fifth book, which she affectionately calls “the longest novel in the history of my life”, in that same tiny bedroom. Looking at a blank wall is easier for writing, she claims, preferring that space for conjuring up characters rather than the spectacular views across the valley, which her bedroom provides.

The house is a warren of spaces, with the old cottage providing smaller, cosier rooms, while a vast sitting room opens up into the space that is the extension, with floor-to-ceiling windows allowing lots of light in and of course, that breathtaking scene over the valley.

“We had a desire to create something really special here and it was important to keep the integrity of the original build, with slate floors and sash windows in the cottage.”

Home is a state of mind to Phillips, as opposed to a particular place, but at a young age she aspired to live with greenery all around her.

“I was born in Mount Pleasant buildings between Ranelagh and Rathmines. These were tenements, basically concrete blocks and a very grey, dark place to grow up in, but even as a child I would get up early to watch the sun come up. Being on the poverty line at a young age and not having the most proud sense of home, I realised home is about what’s going on in your head. I was an avid reader, I adored Enid Blyton – the Famous Five and the Secret Seven – they were always going on adventures in rural settings and at a young age I aspired to one day live in a place full of imagination and nature,” she says.

She has achieved that in spades, and the landscape all around her has several elements to it, but having experienced deep snow drifts in March of this year, she is keenly aware that nature is in control here, and she says there is a “comfort within that”.

In fact, this landscape has been in Phillips’ psyche since childhood, when she read about Oisín and Tir na Nóg; the Glen of the Small Valley was known as the hunting ground for the Fianna, and the story goes that when Oisín came back from Tir Na Nóg, it was in the Valley of the Small Glen where he came off his horse, aging instantly.

“When you drive towards Military Road, the landscape is really unique, you have the forest on your left, on the right it is quite barren, and this is a place where lots of Famine victims were buried. This place has a hugely long history attached to it,” Phillips says.

Not having “deep pockets” when they started work on the property, they did much of the renovation themselves.

“We did it room by room. We spent a year getting the back bedroom exactly the way that we wanted it. With each room, we were able to give them our undivided attention.” She draws parallels between her writing and the restoration of the space. “My writing focuses around a historical incident that might have happened in the protagonist’s life but opens in the current day. I believe the past influences who or what you become, much like this property.”

Phillips and her husband employed an architect to draw up plans for the space, but being a creative, she threw herself into much of the interiors, with moodboards taking over from storyboards for a time.

She says the smaller rooms in the house presented as much of a challenge as the larger ones.

She’s currently contemplating creating a writing room but she’s also apprehensive of moving away from that small attic space, where she gave birth to many of her characters. “I like being up there and away from things, and I like small spaces.”

Since Phillips’ first novel Red Ribbons was released six years ago, she has been proactive, following it up with three others in quick succession – a book a year.

It wasn’t until she saw her first novel on her own bookshelf that she felt like a true author.

“For me, to know my books are on the shelves of other people’s homes around Ireland is the biggest compliment for a writer and for me that is a big thrill,” she says.

This property is always evolving and even when they’re “old and grey”, there will still be elements of the house that remain unfinished, but that’s okay.

“It’s been about this house working around family needs and requirements, so it was hugely important for us to have the space for extended family. We have three children with partners and three grandchildren, so it’s not unusual for all 11 of us to be sitting around the table together and that’s what home means to me. I would find a home anywhere, once my family are around me,” she says.

Next week: Grainne Walsh of Metalman Brewing Company in Waterford