Vincent Browne: The case for an unstable government 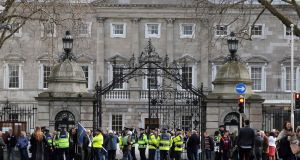 There is no reason now why the Dáil cannot get on with the business of addressing the housing crisis, the health chaos, the water infrastructure deficit and all the other matters that consensus deems important. PAUL FAITH/AFP/Getty Images

It was stable governments that brought us a chaotic health service , that brought about a housing and homeless crisis, that devised a society characterised by deprivation amid opulence, that caused millions of our people to emigrate

Women were abused in Magdalene laundries and children abused in institutions and schools under the control of stable governments, that perpetrated the subjugation of women, that ignored the imminent collapse of our financial institutions, that permitted the dilapidation of our water infrastructure.

We need a stable government as much as we need Fine Gael and Labour back in office or Fianna Fáil with an overall majority.

The object of the exercise must be to ensure that the Oireachtas can fulfil its constitutional function in holding the government of the day to account, in initiating legislation and being the primary author of public policy.

To do that the capacity of the government to intimidate members of the Oireachtas to support decisions taken by a coterie in cabinet – or the coterie that is itself the cabinet – must be ended.

Richard Bruton contends that a government must be able to enact its legislative and budgetary programme and that requires the enforcement of a whip system.

It is not governments that should have legislative and budgetary programmes, it is the elected parliament that should have this and then it becomes the function of the executive arm of government to do as the Oireachtas tells it.

This will offend ministerial hauteur and all the better for that.

There is a provision in the German constitution whereby it is an offence (ie a crime) to interfere with the conscientious decision of a member of Parliament.

We should have a similar provision here and, in our case, actually enforce it. It is reasonable that party whips should prevail on issues that have been the subject of election promises. But beyond that it should be an offence.

Thereby TDs or senators would be free to exercise their own discretion on how to vote on any issue that was not an election promise.

Aside from that, we should inaugurate a procedure applied in the Danish parliament, whereby, what is called there a “decisive minority” can demand an inquiry into any aspect of government policy or action. In our case the “decisive minority” could be one fourth of the Dáil deputies – ie about 40 TDs.

There are further changes that could be made about budget measures.

They should all be openly examined at length in the months leading up to the finalisation of the annual budget, with parties and individual TDs arguing for different frameworks and provisions.

Indeed all government decisions should be subject to examination and debate in advance of finalisation and, ultimately, the approval of a non-coerced Dáil.

In that way we all could see clearly how individual deputies and parties stand on the main issues to do with the distribution of wealth and income, human rights, the accountability of the executive arm of government.

Yes, perhaps in many circumstances, it is desirable to have political stability, including stability of policy. There is no fear on that score in Ireland, where there is a consensus on all crucial policy between Fine Gael, what remains of Labour, Fianna Fáil and, yes, Sinn Féin.

There is no reason now why the Dáil cannot get on with the business of addressing the housing crisis, the health chaos, the water infrastructure deficit and all the other matters that consensus deems important.

There is no excuse for the Dáil to be in recess. It does not need a government to do its work, the caretakers can take the orders of our parliament and get on with it.

It hardly matters whether we have what is called a government for one month or six months or a year.

The business of governance can go on and go on in a better and more open way than before. The agitated handwringers of RTÉ can take a break.

What is depressing however is the nature of that Dáil consensus.

They all accept that the country’s primary concern must now be the contentedness of the privileged and wealthy, lest the privileged and the wealthy cease to lend us the finance to fund our public expenditures and the debts we supposedly owe for the bank failures. Lest they cease to create wealth and jobs or delay doing so.

No block on the impulse of the privileged and the wealthy to plunder the assets of Nama and IBRC.

Yes a few tweaks and not a little strutting but they all know the score.

There is a solid stability within the political establishment that enjoys a massive majority in Dáil Éireann. The markets need have no fear.