‘Any time I write about violence against women, there’s a volley of abuse in the comments on The Irish Times website. Some people just don’t want to hear about it’ 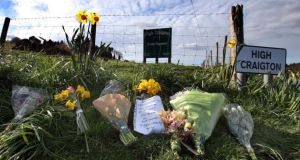 If there was one phrase repeated again and again over the past week as the tragic story of Karen Buckley unfolded, it was that what was happening was “every parent’s worst nightmare”. What happened was also every woman’s worst nightmare. It’s a nightmare, full stop. I think what has happened to Karen Buckley has resonated with so many women, because we have all gone through scenarios of danger in our own minds, if not been through them in real life.

Are these footsteps behind me threatening? Will this taxi driver take me directly to my flat? Is that someone hiding in the doorway up there? There is a reason women are afraid on their own at night. It’s because things like this happen. We know that most violence and rape perpetrated against women are by their partners, yet random acts of physical and sexual violence, verbal abuse and threatening gestures can also be – and frequently are – the acts of strangers.

It is an onus under which each woman must view herself as a potential victim and follow warnings from society: don’t walk here, don’t wear that, don’t be on your own, text your friends to tell them you got home. Yet there is rarely such instruction doled out to our potential attackers. Should we ask men to text their friends to let them know they didn’t harass someone tonight? Of course not, that would be ridiculous. But women are told to update their friends to let them know they haven’t become a victim since they left them.

Steps that some cities and countries take to protect women are viewed almost as novelties. There has been an increasing trend in trying to protect women on public transport, for example. In Rio de Janerio, some subway carriages are marked with pink colours, becoming women-only during rush hours on weekdays. Malaysia continued the pink theme in 2010, adding women-only buses the same year, and women-only taxi services a year later. There are women-only carriages on trains in Japan. In 2013, women came together in Delhi, in the wake of constant harassment and the gang rape and murder of a medical student, to form Cabs for Women by Women. When apps such as Hailo gained popularity, one of the afterthoughts about the service was that it is also good for safety, considering you can track the names of drivers, instead of the more spontaneous and anonymous action of hopping into a hailed cab. Isn’t it incredible that we even need to think that?

We all need to ask ourselves, and the men in our lives, what we can do to make women safer. And we need to ask ourselves what kind of world we are creating for men where women are fearful. What lessons are men learning in our society? How can we stop the terrifyingly high level of violence perpetrated against women by men? We need to encourage male voices to come forward with their solutions, such as those powerfully put in place by the White Ribbon Campaign.

I cannot even begin to imagine the level of devastation Karen Buckley’s parents are feeling right now. None of us can imagine it because it is truly incomprehensible.

One moment she was in their lives. The next moment she was not. How cruel and unnecessary. How random and atrocious. It is, indeed, a living nightmare.

It is because such terrible things like this happen that we need to take women’s fears seriously.

May she rest in peace.