Why I am setting up a Holocaust awareness organisation in Ireland 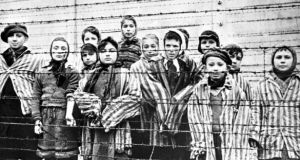 A group of child survivors behind a barbed wire fence at Auschwitz-Birkenau, the Nazi concentration camp, in southern Poland, on the day of its liberation by the Red Army, January 27th, 1945. File photograph: Alexander Vorontsov/Galerie Bilderwelt/Getty

Today is Holocaust Memorial Day. On January 27th, 1945, Soviet troops liberated Auschwitz-Birkenau, the Nazi-run concentration camp in southern Poland where 1.1 million men, women and children were murdered, most of them Jewish. Here, in the words of Auschwitz survivor, Rabbi Hugo Gryn, “Each one of the Ten Commandments was taken and turned on its head.”

For most, the commemoration will have little or no significance. In Ireland, a country with no historical link to this event and barely 2,000 Jews, the Holocaust is understandably not on the cultural radar. For me, however, Holocaust Memorial Day takes on enormous meaning.

Many commentators opine that Europe is beginning to resemble the 1930s. Primo Levi starkly warned: 'The Holocaust happened and it can happen again.'

My mother survived the Warsaw Ghetto. She was thrown off a moving train that was bound for a concentration camp, by her mother. Her father, aunt and young cousin were murdered by the Gestapo. Her stepfather’s six siblings and pregnant wife were murdered in Auschwitz. My father’s uncle, grandparents, along with 20 great aunts and uncles and all their families, were murdered in Treblinka. Remembering the Holocaust in a short ceremony once a year isn’t enough.

I was very reticent about mentioning my family legacy in public, common among many who share this history. My brother, who can seldom bring himself to talk about it, recently told me, so wide is this ocean of grief for him, he fears that if he swims out to it, he’ll never make it back to the shore.

When my wife, Catherine Punch, first learned of the story, she was moved to ensure that the lives of my loved ones be honoured and remembered. She encouraged me to write it down, if nothing more than to help me find an equilibrium. By providing constructive support, she gave me the courage to stand up and speak out. With my mother in her 80s, the onus of ensuring the story not die with her, became impossible to ignore.

The ultra vires actions of populist regimes in America and Europe have harnessed under-regulated social media platforms, ushering in the era of “alternative facts” where, in the words of the historian Jon Meacham, “the age of enlightenment has been replaced with the age of feeling”. Many commentators opine that Europe is beginning to resemble the 1930s. Primo Levi starkly warned: “The Holocaust happened and it can happen again.”

Over the last seven years I have become increasingly active in bringing awareness of the Holocaust to audiences in Ireland. Through programmed events and classes in Trinity College and other institutions, through the radio and in print media I have described what happened to my family and have tried to articulate why the loss is so long tailed. How we, the heirs to a European society that permitted the Holocaust to occur, can prevent a repetition is the key motivation for my activism.

Counterintuitively, I try to lead the audience away from pity towards hope. The horror often has a paralysing effect on those who come to learn about the Holocaust. After I give my presentation, The Objects of Love, most are unable to ask questions when the opportunity is offered – too numbed and too afraid of saying the wrong thing. The Holocaust has a habit of finding the vulnerability in all of us and prising it open without remorse. Turning towards the light is the only way to resist. To quote the Romanian poet, Paul Celan, “I hear that they call life our only refuge.”

Post-war, Jewish refugees flourished in every field of academia, literature, film and music. In the art world, my own professional sphere, refugee artists and art dealers became the warp and weft of the cultural fabric of their new countries; assimilation and integration their chosen routes to belonging to a society which would value and respect them once again. My own life in Ireland has followed a similar purpose.

Ireland is a beacon for human rights in the world; we have no far-right party of consequence and a mercifully low level of anti-Semitism

And finding purpose is all that matters. Viktor Frankl, Auschwitz survivor and founder of the third Viennese school of psychoanalysis, tells us in his 1946 memoir, Man’s Search for Meaning, that the prisoners in the camp who had lost their purpose would not survive. Crucially, he states that to understand your own suffering you need to help others understand their own.

When Theodor Adorno, the German philosopher, wrote in 1949, “to write poetry after Auschwitz is an act of barbarism”, he was trying to understand how German culture could be defined after Auschwitz. Perhaps poetry is, in fact, the only response. Martin Amis famously said, “there’s nothing else to write about”. We inhabit a planet where Auschwitz existed. Accepting this fact, living full lives with meaning as we repair the world is the only antidote.

To that end, I have decided with Catherine to launch Holocaust Awareness Ireland. Together with our advisers, including Tomi Reichental; Lenny Abrahamson; Prof Zuleika Rodgers of the Herzog Centre, Trinity College; Alison Deegan Barry; Donal Denham, former ambassador to Lithuania and Finland; and David Abrahamson, we will host events and exhibitions nationwide.

We will ask writers, artists, film-makers, academics, politicians, journalists and others to comment on contemporary culture through the lens of the Holocaust; why it’s relevant and why we must keep talking about it. I am especially keen that an Irish audience listen to Irish voices on this subject: history magically becomes more relevant when heard in your own accent.

An exhibition of my family story is planned in conjunction with the Office of Public Works later this year. We also hope to facilitate the hosting by the National Museum in Dublin of a photographic exhibition of Auschwitz, in the near future. We will also encourage survivors to continue to tell their stories; they are the most precious and potent voices of all.

Ireland is a beacon for human rights in the world; we have no far-right party of consequence and a mercifully low level of anti-Semitism. If, by telling the story of my family I can reinforce the importance of the politics of inclusion, then I will have honoured those shattered lives, breathed air into their lungs and brought some meaning to their loss where all meaning was swept away.