Saudi treatment of women under spotlight once again

18-year-old Rahaf Mohammed al-Qunun, says she is fleeing abuse from her Saudi family and fears they will kill her if she is returned home. Rahaf says she fled Kuwait while her family was visiting the Gulf country. 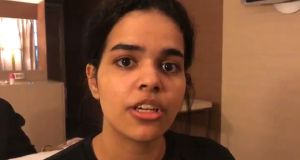 Asylum seeker Rahaf al-Qunun has renounced Islam and could face a charge of apostasy, which, under Saudi law, is punishable by death. Photograph: AFP/Getty Images

The flight from Saudi Arabia of 18-year-old asylum seeker Rahaf al-Qunun has, once again, exposed the ultra-conservative kingdom’s harsh treatment of girls and women. She refuses to return to Saudi Arabia, claiming she has been psychologically and physically abused by her family which denied her higher education and tried to force her into an arranged marriage. She fears she could be imprisoned or killed if sent home.

Saudi male guardianship treats women as lifelong minors requiring permission from fathers, brothers, husbands or sons to travel, marry, divorce, access education and medical treatment, and leave prison. Under Saudi law unrelated men and women are not permitted to mix. Women are compelled to cover themselves from head to toe. Confinement at home or in a prison-like facility are routine punishments for offending against the law or dress code.

Qunun has compelling reasons to be afraid. She has fled her father’s guardianship, travelled without his permission or presence. She has appeared in public bare-headed in a T-shirt and tight jeans rather than an abaya, a body-enveloping cloak.

She has renounced Islam and could face a charge of apostasy, which, under Saudi law, is punishable by death.

She has openly met men who are not close relatives. These prohibited contacts involve Thai officials, police, and representatives of the UN High Commissioner for Refugees (UNHCR) who have given her sanctuary until her case for asylum in Australia is decided. Qunun could be accused of sullying the honour of her family by mixing with these men and murdered by her father, a brother or a cousin. “Honour crime” is rife in the kingdom and perpetrators are rarely punished.

Her father, Mohammed al-Qunun, a senior provincial official, would be under great pressure to deal severely with his errant daughter and the Saudi authorities would normally turn a blind eye, although in this globally publicised case they might urge restraint.

On January 5th, after arriving on a flight from Kuwait at Bangkok’s international airport, she was prevented from boarding an aircraft bound for Australia. Although she had an Australian tourist visa and a ticket for Sidney, her passport was seized and the Thai authorities attempted to deport her to Kuwait, her point of departure.

Since Thailand is not a signatory of the UN refugee convention, she would routinely be sent home or remain until she is accepted for settlement in a third country. The UNHCR has declared her a legitimate refugee. Australia, which cancelled her tourist visa, is considering issuing her a humanitarian visa.

Another Saudi woman, Dina Ali Lasloom, was halted in the Philippines in transit to Australia last April when she attempted to escape her family, and was sent home under pressure from Riyadh. Her fate is unknown although her story was circulated on social media and elicited widespread criticism of male guardianship. Ironically, Lasloom’s forced repatriation preceded by two weeks the Saudi election to a four-year term on the UN Commission on the Status of Women. Saudi Arabia is ranked 141 out of 144 countries on the Global Gender Gap Index.

While awaiting deportation Lasloom appealed to Moudi al-Johan, a Saudi woman who slipped the grip of guardianship in October 2016, applied for asylum in the United States and founded Sisterhood, a magazine meant to help Muslim women seeking freedom from patriarchy.

The 2011 Arab Spring has encouraged Saudi female activists to stir rebellion among oppressed sisters. Computer science engineer Manal al-Sharif, founder of the women’s right-to-drive movement, became an activist icon and was named one of the 100 most influential world figures by Time magazine in 2012. After being detained and persecuted, she left the kingdom, married a Brazilian without Saudi government sanction, another restriction, and settled in Australia.

A number of Saudi women have fled the country and settled in the West in recent years, while others have been either prevented from leaving or forcibly repatriated. The most prominent case was of Loujain al-Hathloul, a women’s rights activist and social media personality, who was arrested in March 2018 in Dubai, and her husband Fahad al-Butairi, a comic, was snatched from Jordan. Hathloul and other jailed women’s rights figures have been abused and tortured.

Qunun’s flight coincided with the kingdom’s adoption of a regulation meant to curb widespread secret divorce by men who declare marriages terminated without informing ex-wives. This abuse leaves them in limbo, without alimony or support for children, and denies them the return of the “mahr” or financial settlement agreed in the marriage contract. Muslim canon law, Sharia, permits men to divorce at will but this must be legalised by courts.

The Saudi justice ministry announced: “Women in the kingdom will be notified of any changes to their marital status via text message”. Women will also be “able to view documents related to the termination of their marriage contracts through the ministry’s website”. Saudi courts have already begun to send notifications, “a step aimed at protecting the rights of female clients.” It is not clear how women without smartphones or access to computers will secure information.

In Saudi Arabia extramarital affairs can be punished with execution. The most glaring case was of 19-year-old Princess Mishaal bint Fahd al-Saud, a grandneice of Saudi King Khaled, who, along with her lover, Khaled al-Sha’er al-Mulhallal, nephew of the Saudi ambassador to Lebanon, were executed in 1977 after confessing their crime. A British documentary, Death of a Princess, was made about this case but did not bring reform.