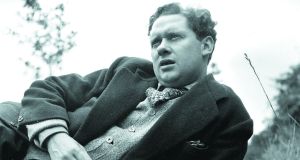 Dylan Thomas is not perhaps the most obvious writer of inspirational quotations about running, given that the athletic activity for which he was best-known involved moving only his elbow. Noting a new personal best in the discipline once, he reportedly commented: “I’ve had 18 straight whiskeys. I think that’s the record.”

But whenever I lace my runners up around this time of year, I often think of him, and not just because today is his birthday. More to the point is the coincidence with shortening daylight hours, and the winter clock change in particular.

Usually by now, it will be dark – and probably cold – when I’m heading outdoors. So I find myself quoting the lines of a classic Thomas poem, which works well as a motivational mantra: “Do not go gentle into that good night [...]Rage, rage, against the dying of the light.”

Yes I know it’s not about running, exactly, except in the sense of running out of time. But for athletes of advanced middle age, whose knees are experiencing intimations of mortality, it functions on both levels.

That Samuel Beckett also lends himself to motivation is less surprising. He was a fine sportsman in his time, well known for running, if only between wickets. Also, he once flirted with a career as an advertising copywriter.

So even when he’s writing about the bleakness of the human condition, his thoughts can often be reframed as something Nike might come up with to sell shoes. “Try again. Fail again. Fail better” is the extract most often quoted by sportspeople.

For people in the closing stages of tomorrow’s Dublin City Marathon, however, the most useful Beckett mantra will another three-liner, from The Unnamable: “You must go on. I can’t go on. I’ll go on.”

In general, writers are of limited help to long-distance runners because, among other reasons, they tend to be better at describing pain than distracting from it. Also, many of the most famous ones were even less athletic than Dylan Thomas.

One list of inspiring literary quotations I saw on a running website recently included a line from George Elliot’s Middlemarch: “Failure after long perseverance is much grander than never to have a striving good enough to be called a failure.”

Even if you could remember that while running up Roebuck Road, aka “Heartbreak Hill”, at the 22-mile stage tomorrow, it would hardly encourage persistence. On the contrary, it makes a strong argument for dropping out at that point – something your knees may also be suggesting. According to Elliot, you’re already on the moral high ground compared with those who didn’t start. Climbing another hill might be just showing off.

Jane Austen’s “the distance is nothing when one has a motive” – another on the list – might be more useful. But what of Nietzsche’s, “And those who were dancing were thought to be insane because they could not hear the music?” Yes, it works as an apologia for ageing runners, whose sanity may indeed be questioned. On the other hand, it could also accidentally encourage the use of earphones in races, which is at best anti-social and at worst dangerous.

The fact that writers tend not to be runners, and vice versa, was a sub-theme of a book some years back by Haruki Murakami. He happens to be both a prolific novelist and a completer of multiple marathons, although his performances in the former sphere are probably more impressive, earning him regular mentions in Nobel long-lists.

But in his memoir What I Talk About When I Talk About Running, he noted a certain prejudice against the idea of writers doing anything athletic. This was especially so in his native Japan, where many seemed to think “that writing novels is an unhealthy activity, that novelists are somewhat degenerate and have to live hazardous lives in order to write”. Murakami agreed with this to a point: he thought writing could be mentally and morally hazardous. But that made it all the more important to be physically fit. “That’s my motto,” he wrote: “[..] an unhealthy soul requires a healthy body”.

As a mantra, this wouldn’t help much while you’re actually running. Nor would another of his conclusions, although this one takes the baton from Dylan Thomas (after he dropped out of the human race aged 39), and runs with it. “One of the privileges given to those who’ve avoided dying young is the blessed right to grow old,” wrote Murakami, then nearing 60. “The honour of physical decline is waiting, and you have to get used to that reality.”