As Citizens’ Assembly turns to environment, it is clear Government is shirking challenge 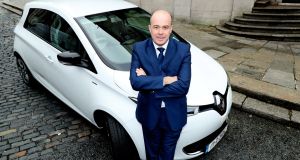 Minister for Climate Action Denis Naughten at the handover of his new 100% electric car. Last month, he flew to Brussels to demand that the State be allowed to opt out of even the basic emissions commitments we had already signed up to. File photograph: Maxwell Photography

Nobody knows for sure what the future holds, either for us as individuals or as societies, but if you look closely, there is a growing body of scientific evidence to suggest it will be quite unlike the present, in ways we can yet barely imagine.

This newspaper recently engaged a panel of what it called “big thinkers”, spanning economics, futurology, planning, medicine, psychology and beyond, to gaze into the middle distance and ponder what life might be like for a baby born this year towards the end of the 21st century.

Physicist Niels Bohr once cautioned, half in jest, that: “prediction is very difficult, especially about the future”. Take this bold pronouncement from Klaus Mogensen of the Copenhagen Institute for Future Studies: “Each generation lives five years longer than the previous generation. It’s possible we’ll get a breakthrough that will allow people to live indefinitely”.

Possible, but extraordinarily unlikely. Among the stellar cast of future-gazers, there was not a single representative from any branch of the physical sciences. This is perhaps just as well, since their views might conflict sharply with the future fantasies of holographic meetings, space tourism and hyperloops.

A few days after the prognostications of the “big thinkers” appeared in print, the World Meteorological Organisation published an altogether different view of the coming decades. Its “Greenhouse Gas Bulletin” began by describing the abrupt changes in the global atmosphere witnessed over the past 70 years as being “without precedent”.

The atmosphere today contains 45 per cent more carbon dioxide (CO2) than in the pre-industrial era. This, the WMO cautioned, is leading to ever more “severe ecological and economic disruptions”. The pace of change is what is most unnerving.

Since 1990, there has been a 40 per cent increase in what’s known as the total radiative forcing – the warming effect of greenhouse gases, according to data from the US National Oceanic and Atmospheric Administration. This is a quite staggering change in the fundamental conditions for life on Earth in barely a quarter of a century.

The last time the Earth experienced a comparable concentration of CO2 was 3 million-5 million years ago. Then, global average temperatures were 2-3 degrees warmer than today and sea level was 10m-20m higher. Climate system inertia means there is a delay before permanently high CO2 levels trigger these devastating effects.

Sea level rise of even a fraction of that, would create tens of millions of climate refugees, triggering ever-worsening crises that would likely cause many nation states to fail, while bringing the global economy to its knees. Quite how hyperloop construction and space tourism might fare in such chaotic conditions remains unclear.

In an Irish context all our main cities, ports and airports are in coastal locations and at risk of inundation and abandonment over time. While dreams of infinite lifespans tempt the imagination of futurologists, a major recent study in the medical journal The Lancet found that: “the delayed response to climate change has jeopardised human life and livelihoods”.

The Lancet report detailed how global warming is aiding the spread of disease-carrying insects, worsening allergies, and increasing exposure to ever-worsening heat waves. Globally, it found “125 million more vulnerable people over the age of 65 years were exposed to heatwaves in 2016 than in 2000”. It warned that if global temperatures are allowed to rise by 4 degrees, frequent “super heatwaves” would sweep Europe and elsewhere, with temperatures hitting a lethal 55 degrees.

This weekend, the Citizens’ Assembly, chaired by Justice Mary Laffoy, meets in Malahide to discuss Making Ireland a leader in tackling climate change, and to issue recommendations to government. With the third-worst per capita emissions in the EU, for Ireland to strive towards being simply mediocre would represent huge ambition.

In July, Taoiseach Leo Varadkar stated that tackling climate change would require “fundamental societal transformation”. Yet last month, his Minister for Climate ActionDenis Naughten flew to Brussels to demand that Ireland be allowed to opt out of even the basic commitments we had already signed up to. In so doing, we are helping undermine the EU’s collective resolve to take vital action now to protect all future generations.

Back in 2014, then taoiseach Enda Kenny solemnly told the UN in New York: “The hand of the future beckons, the clock ticks and we have no time to waste.” Within a month, he redacted that position to state instead that Ireland “would be screwed” if we were to comply with modest emissions targets.

Naughten has used less colourful variants of this line ever since, while displaying reckless disregard both for global climate justice and intergenerational fair play. What the Minister and his phalanx of sharp-suited advisers have failed to grasp is that physics doesn’t do deals.

Thinking only of present comfort and beholden to powerful vested interest groups, Ireland is today eating the proverbial seed corn tomorrow’s children will depend on.

John Gibbons is an environmental writer and commentator and tweets @think_or_swim

1 A vegetarian and a non-drinker visit Ireland: here’s their verdict
2 Eyewitness to Auschwitz: ‘We were held in the wagons like animals’
3 Is Ireland moving left or simply moving on?
4 Who are Ireland’s 17 billionaires?
5 Dublin ranks 120th out of 150 cities for raising a family
Real news has value SUBSCRIBE